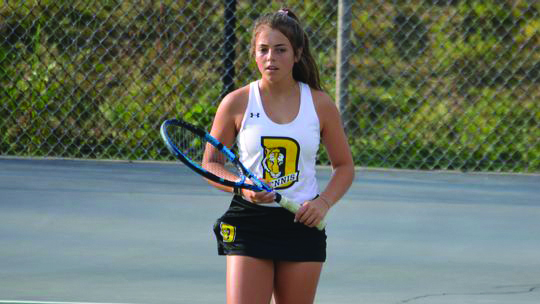 The DePauw women’s tennis team won three singles flight championships and the number one doubles title against Grace College and Huntington University during their only home competition of the fall, according to DePauw Athletics.

“I missed the first away match this season, so it was exciting to play my first match at home,” Werner said.

She said that she is looking forward to the season to come, because she will get to play a lot more in the spring.

“Our fall season ends in early October and we have a while off between the spring season, so I will be doing a lot of practicing,” Werner added.

According to Werner, their team feels strong this season, especially with the new first-years that have recently joined.

“Overall, we did really well this weekend, but there’s always more work to be done,” Werner said.

“I was nervous, because it was my second actual college match and my parents came to watch,” she said.

Doherty said that playing in college is a lot different than high school because she is more focused on the team aspect of the game instead of the individual. She also enjoys the company of her teammates and feels as though she can learn a lot from them.

“Everybody on the team has done a really good job at accepting the first-years and helping them get acclimated to the team, which has been a huge help,” Doherty said.

Their next match is Sept. 30 - Oct. 2 at a tournament hosted by Washington University in St. Louis. They will compete at the Intercollegiate Tennis Association Central Region Tournament.