As of 2019, 95% of television coverage is focused on men’s sports with only 5% dedicated to women’s sports. National Girls and Women in Sports Day (NGWSD) occurs every year in February to bring awareness to these statistics and to celebrate women who play sports from the professional level to the recreational league. This year’s celebration was the 50th anniversary of Title IX which gives women athletes the right to equal opportunity in sports in educational institutions that receive federal funds. 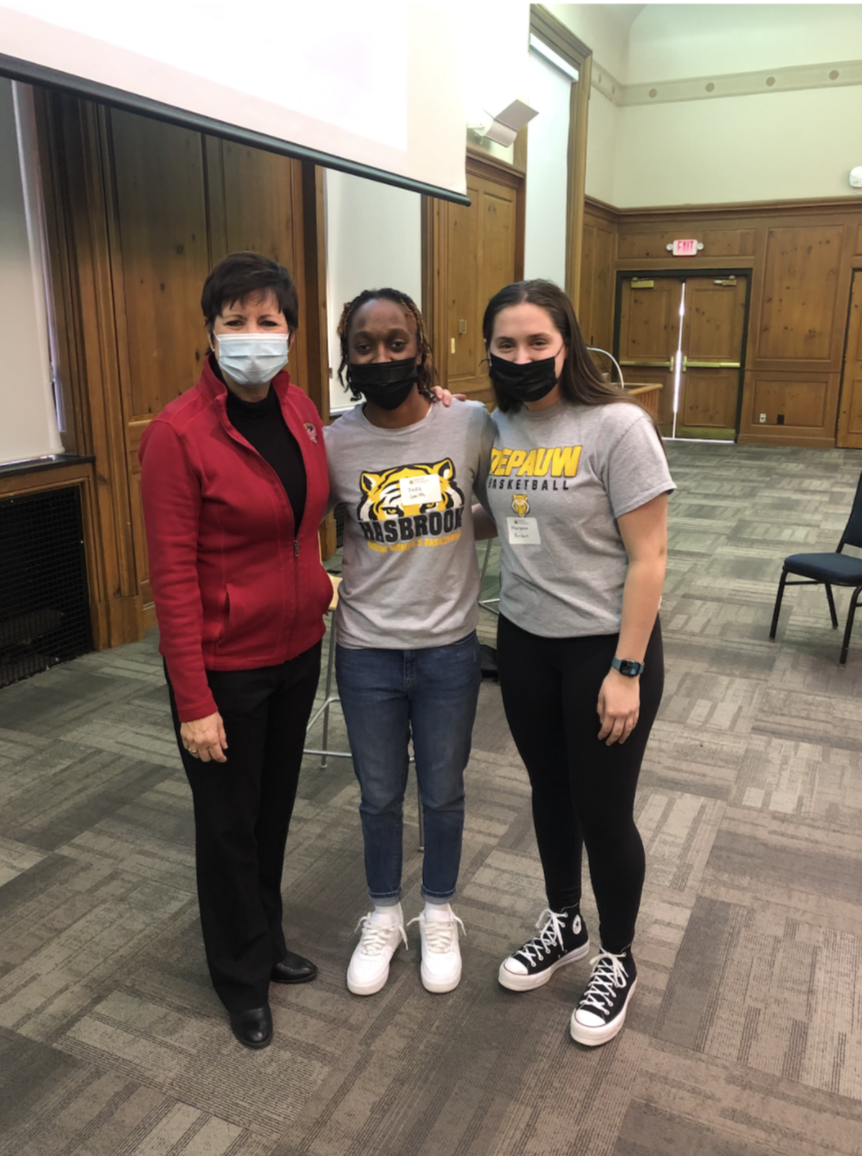 Image 1 of 3
DePauw hosted its own hybrid event this past weekend on Sunday, Feb. 20, in the Union Building ballroom. Ashleigh Jones, assistant director of athletics communications, and a group of student-athlete volunteers put the event together and had been planning for the past few months. Jones said, “An event like NGWSD is important to me because of its intentionality towards highlighting women’s sports. It’s putting individuals into one space and showing everyone in the room that we are going to support each other and fight to grow women’s athletics.”

At the event, there was a star-studded panel featuring Lori Lindsey, a former U.S. Women’s National Team soccer player; Jenna Contreras, an ESPN feature producer; Cassidy Litchman, a former USA Volleyball National Team player; Gwen Svekis, Athletes Unlimited softball catcher; Beth Woerner, assistant baseball coach for Lebanon Valley College; and Abi Jackson, Athletes Unlimited Sports Director for Lacrosse. These guests were Zoomed into the conference and were asked questions about how to navigate the inequalities in women’s sports compared to men, as well as how they were able to be so successful in what they do. Each of the women shared their own experiences and how they overcame the adversity of being a woman; some shared the adversity of being a part of the LGBTQ+ community as well as being a person of color.

Breakout rooms occurred in person and were facilitated by students and staff. Jaida Smith, a junior on the women’s basketball team, was the leader of the storytelling group. She said, “My group talked about how women’s successes are often minimized based on the competition they face by men even though they put in an equal amount of work to reach the success they have.” Other groups discussed being a holistic athlete, activism in athletics, as well as life beyond athletics. Jones expressed that “the overall purpose of the panel and breakout rooms were to ignite an interest and show our students that a career in sports is a viable option.”

To wrap up the conference, attendees were joined in person by Dr. Allison Barber, president and chief operating officer of the Indiana Fever.  Barber shared her own story and answered the question “What does ‘To Be Determined’ mean to you”? Ashleigh Jones said, “If I learned anything from this event it’s to always ask questions and be open to building relationships for networking.”