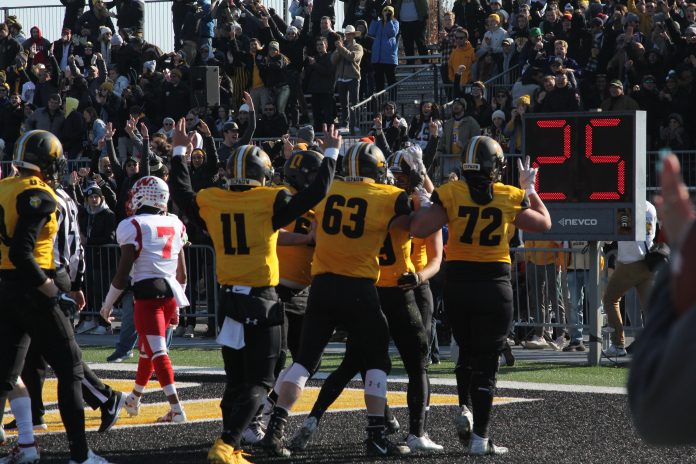 COVID-19 sidelined DePauw’s athletic competitions for the fall 2020 season. In response to the pause in competition, DePauw’s athletic department put together a plan to phase-in the return of athletics. This three-phase plan aims to keep athletes safe and healthy as they ease back into team sporting events.

Each phase has its own specific set of guidelines that work in conjunction with the other phases to ensure that sports teams are prepared to protect everyone while practicing. The main difference between the last two phases is that phase two restricts practices to be either offense or defense only training while phase three allows for full offense vs defense training. However, because some sports require facility-usage or contact that puts them at more risk than other sports, the guidelines vary by sport depending on the risk of viral transmission.

Tracy Menzel, head women's swimming and diving coach and aquatics director, recognized that moving from phase two to phase three won’t significantly impact their practice plans. “As a low-risk sport, we can conduct our practices without any contact and while maintaining physical distancing recommendations,” said Menzel.

However, up until now, Coach Menzel’s swimmers have not been able to share or fully utilize equipment during practices. Now, “Phase three will allow us to share equipment, with proper sanitization, within a workout, so we can utilize Power Towers, Power Racks, and Starting Blocks more frequently,” said Menzel. In spite of the easing of restrictions, she believes most practices will remain the same. “As we seek to minimize risk for our student-athletes, we will continue to follow the majority of the guidelines from Phase two,” she said.

Brad Hauter, head men’s soccer coach, is excited that more athletes will be allowed on the field at one time and be in contact with one another. “[Moving to Phase three ] allows us to work in larger groups (25 vs 10) and to have contact (defending) as before it was just technical work,” Hauter said.  Earlier in the semester players were only allowed to focus on technique work and weren’t allowed in-contact with each other. “Technical work is great and always needed,” Hauter said,“but we want to compete and are excited to be able to again.”

Although the implementation of phase three is a step towards competition, there is no guarantee that competition will happen anytime soon. However, DePauw athletics recently announced that they will be pursuing competition opportunities for winter sports in the spring semester, despite the NCAC canceling the winter season.

Reanna Stiehler, a two-sport athlete, explains that this transition into phase three will have a much greater impact on her soccer practices than it will for track and field. The individualism and lack of contact make track and field a low-risk sport to begin with so these new guidelines haven't had much effect on the way her practices go. However, Stiehler does not believe this move is a step towards competing again.

“It's one thing for us to be in phase three only in the DePauw bubble and an entirely different thing to be able to compete against others.” Steihler said.“If all the news we received this summer has taught me one thing: it's to wait for the decision and keep hopes low, regardless of any hope the administration attempts to give us.

While Daniel Sheehan, a running back for DePauw’s football team, agrees that there is a big difference between being able to have contact practice and being able to compete. Sheehan believes this move is a significant step towards competition but expressed some concern. “I think this move can only be good on the way to getting competition back, but I also think we have a long way to go,” Sheehan said. Many things need to be worked out throughout the conference and other schools if we are going to compete next semester.”