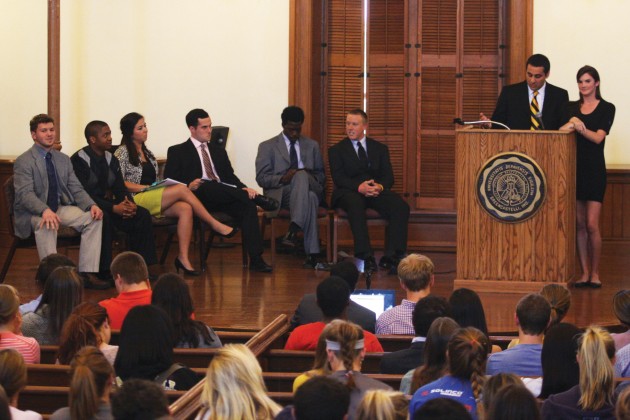 Candidates kicked off the debate relaying to the crowd why they should be elected.

"Myron and I are dedicated to letting the students know what is going on," said Garlock, the presidential candidate. "We want to bring back the fun at DePauw."

Scully had a different take on what she would bring to the table as president.

"We want this office because we know how to bring about effective change," said Scully, who is seeking presidential office, in regards to herself and her running mate, Fadel.

Nazari has been involved with student government for the past three years in a variety of positions, and her running mate Kirkpatrick is the president of Beta Theta Pi fraternity - positions they believe will help them gain success in office. Bonta spent his junior year as president of Sigma Nu fraternity and has served on the student board of trustees. Scully and Fadel both spent the past three years on student government as well. Garlock and Burr are also heavily involved at DePauw.

"We want to be sure whoever is in this position is going out there and is making sure they understand the students perspective instead of saying, 'please bring me your opinions,'" Scully said. They also want to amend every white paper to address which administrators should read it, and when it needs to be read by.

Nazari and Kirkpatrick wanted to inform the listeners that they were dedicated to the cause.

"We know exactly what we are striving for," Kirkpatrick said. "We can take on any campus issue and we know how to."

Candidates gave their take on core student government issues, such as where allocation board money goes, the need for transparency in where the money goes and how they will conduct their presidency.

Narzari commented that there are more student organizations than there have been in the past seeking out money, requiring a more structured system to be implemented.

"Allocations should reach out to all student organizations to make sure everyone comes out happy," Burr said.

Currently there is little communication between the allocations board and the student body to where money goes. Kirkpatrick hopes to alleviate this problem.

"We favor bringing the Director of Allocations back on to DSG," Kirkpatrick said. The move would hopefully erase some of the issues of where money goes.

"I want to support the idea that all student bodies participate in student government," Johnson said.

Garlock and Burr expanded the idea of bringing the campus closer together with the student government with their plan by encompassing the Greencastle community as part of their plans for unification.

Passing and implementing white papers, along with relaying information about what the white papers are trying to accomplish was a large speaking point for Scully and Fadel.

"It's not just talking about the issue, it's doing something about it," Fadel said.

Scully told the audience she would work hard to pass white papers, because she had done so in the past. She cited her work done to pass a white paper to ensure the quietness of the third floor of the Roy O. West library as a clear example that she is both willing and able to get the job done.

"When passing a resolution we want to make sure we have an understanding of what's going on. We should know what we are doing we should know how the community responds," Scully said.

Conveying information to the student body about white papers was important to Bonta, who believes that there isn't enough communication currently.

"We will make sure information about a white paper gets passed along," Bonta said.

The candidates all received a minute for a final word in the debate. Pierre promptly called time when their minute was up, halting the speeches.

Voting opened up Thursday at midnight, and it will close on Saturday. Students can vote by logging into their E-Services account and scrolling down to the tab labeled 'student government elections' on the lefthand side.