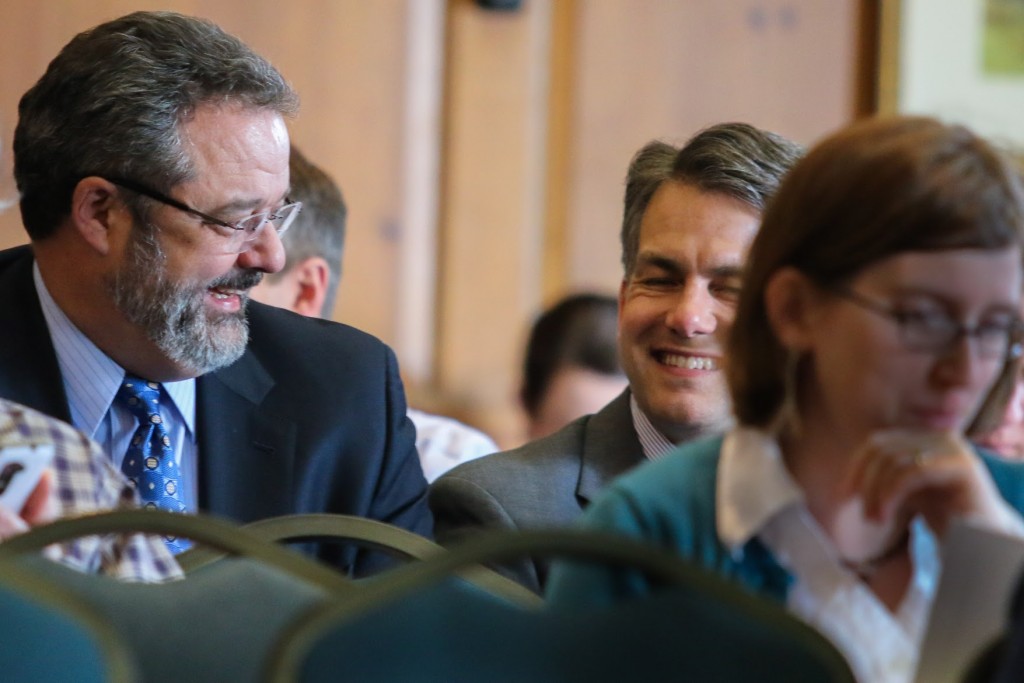 President Mark McCoy laughs with Steve Setchell, Associate VP for Alumni Engagement and Campaign Initiatives, before a faculty meeting Monday. Before being named the 20th President of DePauw University, McCoy was the dean of DePauw’s School of Music. SAM CARAVANA / THE DEPAUW

This decision comes after months of closed interviews conducted by the Presidential Search Committee, headed by Kathy Vrabeck ‘85. The committee was made up of ten alumni trustees, four members of the faculty, two members of the administration and two students. This division of committee members means that, while faculty, administration and students did have a say, the alumni trustees had numbers skewed in their favor if a candidate were to come down to a close vote. After becoming the search committee’s top choice, McCoy was then approved by the Board of Trustees. He will take over for current University President Brian Casey on July 1.

The announcement was made in an email to faculty, staff, students and alumni on Monday evening.

“[McCoy] understands [DePauw’s] traditions, knows its people, has successfully led a reinvigoration of the School of Music, and is committed to building a better DePauw – one that will continue to stress academic rigor, life-changing faculty-student interactions, a social environment that builds character and lifelong friendships, and a campus that continues to strive to be a more diverse and inclusive place,” Vrabeck wrote in the email.

McCoy first arrived at DePauw in 2011, when he became the Dean of the School of Music. While in that position, he spearheaded the 21st-Century Musician Initiative.

“He’s done great work with the School of Music. When he first got here, the School of Music was in a very rough state,” said Student Body President Craig Carter. “That’s a big deal that he took something that was not necessarily going to be here anymore and made it strong, made it one of the top schools of music in the country, and I think that’s something that set him apart from the other candidates.” 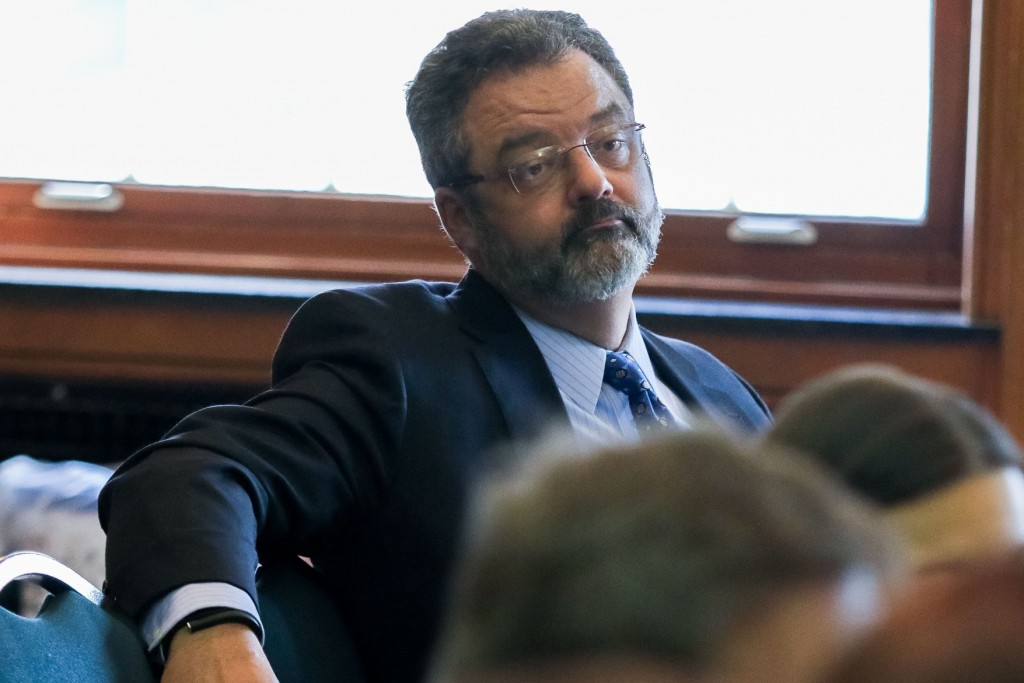 Carter also stressed how McCoy’s role as Dean of the School of Music qualified him to take on the role of University President.

“They do have a sense of community there [in the School of Music] that isn’t seen in the [College of Liberal Arts,]” Carter added. “I think if he can translate that sense of community and that sense of belonging to the College of Liberal Arts and make it a campus wide thing then he’ll have done something great…he’ll have done something that so far we haven’t seen.”

But Carter believes that hiring from the inside will serve DePauw well, especially considering the delicate state of DePauw’s campus climate.

“Of course he’ll go through his growing pains…but I think being an internal candidate he has an insight that other people don’t,” he said. “I think he knows the culture of our campus. He’s not going to have to be that person to feel out the campus to see if he really does mesh or not.”

McCoy himself believes that his role as the Dean of the School of Music helped him to understand the culture at DePauw better than some of the other candidates.

“Being the Dean of the Music School is great training ground for being President because you keep a crazy schedule, you see first hand the impact on students lives, you have the opportunity to work directly with faculty, you’re out raising funds, you’re attending a lot of events, you’re representing the institution, so I think all of those things together helped me prepare for this,” he said.

However, he attributes much of his presidential preparation to his five-year stint on the Presidential Cabinet.

“My work on the Cabinet gave me the opportunity to work directly one-on-one with a really stellar team, to see our operational styles and the types of things that are before us, the work to be done,” he said. “I’ve been here for five years. They know how I operate, they know my values, they know what kind of person I am, so it was a five year audition. For everyone else they got five days. So it was plenty of time for them to discover who I am and what I do.”

So what will President McCoy do? One of his primary initiatives includes financial aid. As a first-generation college student, McCoy understands how crucial a good financial aid package can be to making one’s college decision.

“On the one end, college tuition continues to increase, yet the median household income does not, so eventually this is going to become unattainable and we’re getting closer to it all the time,” McCoy said.

And, while McCoy may not be as culturally diverse as many people were expecting out of the new President, diversity and inclusion are still among his top priorities.

“The first thing we will do as a cabinet is do a deep dive into cultural competence training,” he said. “This is not a box that can be checked. This work will never be done. There’s not an end point. We’re constantly striving to become more aware of our society and our role within it. So in the music school, I’ve helped diversify our staff, I’ve worked assiduously to do that for our faculty, the diversity of our student body in the music school has increased continuously over my time here. And that’s a serious focus and a very intentional effort that the types of artists that we bring and the types of conversations that we discuss.”

Among McCoy’s diversity initiatives will be a discussion of the possibility of making the DePauw Dialogue an annual event.

But McCoy does not think that because he is a white, heterosexual male, he is confined to relating only to people of that same background. He wants to reach out to groups on campus and show that he is committed to furthering their initiatives.

“Diversity comes in a lot of different ways. It’s not just the color of your skin or your gender or your religious preference or whatever it may be. For me, as a first-generation college student from a different socioeconomic background, I have a different perspective than another student might who was from a more privileged background, but I think that the important thing is the commitment to diversity,” he said. “For that, you do not have to be a minority candidate to have that commitment and I think that people will see, in time, a very strong commitment from this administration to diversity.”

While Carter said he has been receiving angry text messages galore from students who were hopeful for a woman president or a person of color, he does not think the student body should discredit McCoy simply because he is a white male.

“I think it’s funny when we talk about being a white male in America. If you said that two or three years ago, he’s the greatest person in the world. Now you look at it and often times a lot of white males are really thrown down,” Carter said. “A lot of students of color feel that we did not stick to the charge that the committee made public of searching through a diverse committee pool. ….You’re never going to please everybody and I think if Mark can show an ability to connect with the different communities on campus, maybe not from a personal level but from a professional level and a standpoint of being able to help people, then he’ll be okay.”

One of the areas in which the Search Committee felt McCoy would excel is in town gown relations. As a Greencastle resident with three children enrolled in the community’s school system, he is known throughout the community and will likely find ways to connect the DePauw and Greencastle communities, as he has done in the past. As Dean of School of Music, McCoy brought music and concerts to the square, among other initiatives, in attempts to get DePauw students and Greencastle residents in the same space.

A reception will be held for the incoming president today from 11:30 a.m.-1:30 p.m. in the Great Hall of the Green Center for Performing Arts. An additional reception will take place from 5:30-7:30 p.m. for those who are unable to attend the earlier time. At this reception, students will get the chance to meet McCoy if they haven’t already and ask him any questions they may have.

-Emily McCarter contributed to this article