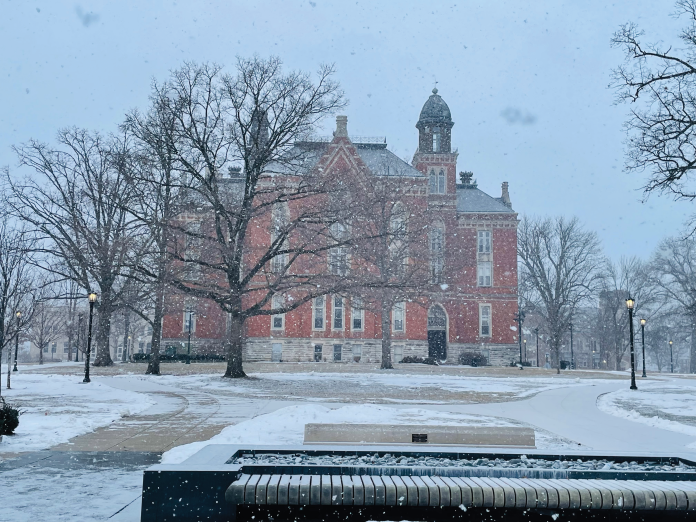 On Sunday, February 27, first-year students piled into Thompson Recital Hall in the GCPA to hear Dave Jorgenson speak as part of DePauw’s GOLD Speaker Series. Jorgenson, who graduated in 2013 with a bachelor of arts in English writing with a minor in film studies, was a Media Fellow, the Director of WGRE, a columnist, cartoonist, and feature writer at The DePauw, the creator and host of The Pre-Recorded Late Night Show, as well as the president of the DePauw Rugby Club team, and a member of Delta Upsilon fraternity.

Jorgenson, known on the internet as “The Washington Post TikTok Guy,” transferred to DePauw from the University of Tulsa after finding out about an internship offered by DePauw at Comedy Central’s The Colbert Report. He shared stories of his successes during the internship, including a story about the time he made it onto the show. However, he quickly followed it by saying, “you can have failures too,” and talked about how writing a blog post about being on the show led to a violation of an NDA and the ultimate termination of the internship. “It’s important to have failures, but also to pick things up and start to make something new.”

That “something new” Jorgenson created was “the Pre-Recorded Late-Night Show” on D3TV. The show’s “about” page on YouTube describes it as “DePauw's number one pre-recorded late night program.” On creating the show, Jorgenson said, “I used every resource available to me at DePauw.” The show featured skits, including one mocking a Wabash student bashing DePauw students and our way of life. (*Author’s note: Dear Dave Jorgenson- If you’re reading this, The DePauw staff would like to see the rest of that Wabash sketch. You said we could find it online and we can’t. Please help us, we just want to laugh at Wabash. Thanks!*)

Following his graduation, Dave did what any millennial would do: go to LA to be a barista. Not long into this West Coast adventure, Jorgenson received an offer to work in Washington DC at The Independent Journal Review making Vines (R.I.P. Vine). Eventually, Jorgenson took a job at the Washington Post’s Department of Satire, where he pitched the idea of creating a TikTok page for the department. Of the pitch, he said, “I had a lot of nerve [making the pitch], which I think is something you get from DePauw.”

Jorgenson closed his talk by sharing how incredibly excited he was to have gotten a free stay at the Inn at DePauw, which he said was super nice. Before the talk ended, Jorgenson took a few audience members’ questions, including “What advice do you have for making a bigger impact on campus?” He answered, “I think it really is about trying to draw those connections across campus… include other people with different aspects. There are a lot of people on campus who are good at a lot of really different things.”

In case you’re wondering how these speakers impact students, just know that there was a lot of discourse on YikYak about the Pre-Recorded Late-Night Show. Students, inspired by Dave’s encouragement to try new things on campus, have been discussing possibly reviving the show. “Who’s trying to bring back the Pre-Recorded Late-Night Show for real?” Whether or not the show makes a comeback is up to students, but many gained inspiration from Jorgenson’s enthusiasm.