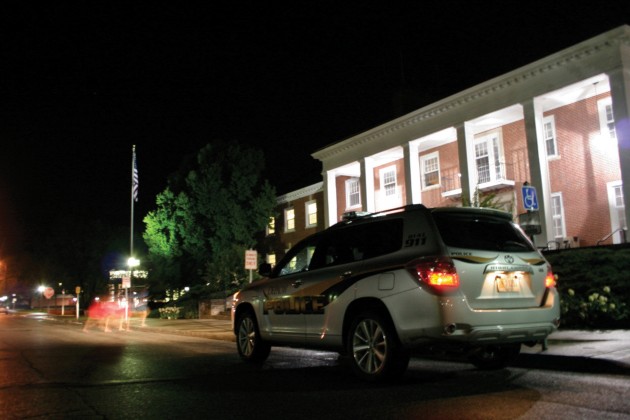 The role of public safety on campus is easy to summarize for Angie Nally, director of Public Safety.

"We're a lot more than law enforcement," she said. "We are a part of the educational experience."

Nally and the other members of the DePauw Public Safety office offer many protective and emergency-related services.

The police officers, all of whom are sworn officers in the state of Indiana, handle a variety of tasks. Everything from patrolling the campus, providing security, responding to emergencies,  participating in the community standards process, and responding to sounding fire alarms falls under the officers' jurisdiction.

Like other patrol men and women, Public Safety officers can issue citations and make arrests.

Although many campuses have some form of campus police, some such officers are not always sworn. DePauw's officers receive the same training as other Indiana officers, but require additional specialized training to deal with issues specific to college campuses.

Nevertheless, it is primarily DePauw Public Safety, not the Greencastle police that respond to campus needs.

Ed Wilson, a patrolman for the Greencastle Police Department, said that unless additional assistance is requested, Greencastle police officers are "limited to a pass through" of campus areas. Wilson attributes this to a need for Greencastle officers to patrol and assist other areas of the city.

Bruce Stinebrickner, a professor of political science, finds this principle to be troubling because it means Public Safety officers are not responsible to any traditional law-enforcement arm of government, barring the swearing-in process.

Nevertheless, Nally and Wilson both say that there is little difference between the way the two forces handle issues on campus and in the city, respectively.

"Greencastle police treat DePauw students as everyday citizens, so I assume a sort of leeway," Wilson said. "As far as us, if someone violates a law, they need to be dealt with. Every time I've seen DePauw handle something, it's been as we would have done."

One contrast is that instead of entering the legal system, DePauw students may participate in Community Standards proceedings. According to the Student Life website, one tenant of Community Standards is to "hold each student to a high standard of behavior, both to protect the campus community and to promote student moral development."

"We have a relationship with students and if someone has an infraction students prefer public safety to some type of other police interaction," she said.

Wilson said that the process for dealing with the same situation is generally similar.

"As a police agency we're concerned about citizen welfare. . . for minor consumption of alcohol, we're allowed discretion," he said. "We don't always need to haul them off in handcuffs."

Sophomore Matt Keinsley, the risk manager for Delta Upsilon fraternity and a resident assistant for Hogate Hall, said that the leeway Public Safety provides is helpful.

"If we need help at a party controlling a situation they are definitely there to back up the risk management team," he said. "They don't come in and arrest the person who's intoxicated, or shut the whole party down."

"They really look out for the overall welfare of campus," he said. "We consider Public Safety a last resort for if someone gets hurt or is out of control beyond our help. I think [Public Safety] takes a more realistic approach to the DePauw lifestyle."

Nally and Wilson both stressed that without Public Safety, services provided by Greencastle police forces would be less than what Public Safety provides.

Patrolling a larger area would mean, according to Wilson, slower response times to the needs of the campus. Additionally, Public Safety responds to every call they receive — whether it be medical, a fire alarm, or a different emergency situation — while Greencastle police do not because of limited resources.

It is this more specific treatment that leads Stinebrickner to question Public Safety as an institution.

The office of Public Safety, though, offers a campus service that students note.

"In the grand scheme of things [public safety officers] might be a little too nurturing," Riggs said. "But we're a party-oriented school, so it helps to have Public Safety."