DePauw University’s student-run undergraduate literary magazine serves as a creative outlet for artists and writers on and off campus. The optional theme for this semester is “Change or Transformation,” a timely prompt to spark inspiration about experiences in the past several months.

With constant feelings of stress and isolation, the magazine titled the Midwestern Review is a resource to remind students that they are not alone.

“With the pandemic, it’s very easy to just become absent from the world because we’ve all been confined in our houses,” says Area Guede Ramos, editor-in-chief of the Midwestern Review. “I think through art you can make that connection back with the world. You can understand what’s going on through other’s mind and you

can also speak your own. It’s a healthy way to cope with what we’re all going through.”

As editor-in-chief, Guede Ramos ensures that the publication process goes smoothly, and works closely with the poetry, prose, fiction, nonfiction, and art editors. At the beginning of every year, the Midwestern Review hosts one big meeting to welcome everyone who wants to be a part of the team as either a reader or an editor of student submissions.

The magazine is usually printed out and distributed around campus, but due to COVID-19 guidelines, they switched to a digital platform this year for the first time.

Jacob Sipes, managing editor and graphic designer for the literary magazine, is excited for this year despite the change in formatting. Although they have only had one virtual meeting so far this semester, he describes it to have been a positive environment. “We got a few new faces, a few new readers for the magazine. It’s really nice to just see everyone’s excitement for this school year. Even over Zoom, it’s something that still translates,” Sipes says.

Working for the Midwestern Review is a low time commitment and can be a great way to keep in touch with creative people on DePauw’s campus. 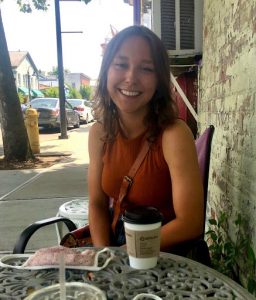 Sasha Taxter has been involved in the magazine as a poetry reader and editor for several years. The team holds a special place in her heart as a community for creative students like herself.

Taxter sees her involvement in the team as a way to give back to students who are creating art on campus. She loves that the Midweste

rn Review provides a platform for recognition. “I love reading through all the submissions because there’s a secretive element to it, so I can’t really go up to people and be like ‘hey, I loved your po

em,’” says Taxter. “It’s really cool to see the different perspectives on campus, the different pieces that people are producing. I feel like I get insight into something bigger than myself.”

Throughout the semester, readers and editors work together closely to look through student submissions and decide which works to accept for publication. This year, the team is composed of 18 DePauw students, a substantial increase in involvement than seen in years past.

An explanation for this could simply be the relatively-distant deadline of November 1st for submissions, but Guede Ramos believes there are additional causes. She notes that student isolation and remote instruction likely plays a role. It could be that DePauw students are stressed out having to deal with school and the pandemic, along with other domestic changes happening this year, she mentions.

In addition to the real-world chaos that has consumed 2020, Sipes believes it’s important to note that a lack of student submissions could be the Midwestern Review’s failure to produce any physical copies of the magazine in the past couple years. He credits this to last minute issues with designs and printer failure. “It’s definitely important that we acknowledge that as an organization perhaps these issues have discouraged people from writing or submitting,” Sipes says.

This year’s theme of “Change or Transformation” calls student’s to reflect on the past year and express the different directions in which life has pulled them.

The Midwestern Review may be intended as an outlet, but the stress of current world issues has led to stifled creativity for many artists and writers. “The moment the pandemic hit and everyone was supposed to be confined to their homes, we kinda lost all motivation,” says Guede Ramos. “The creative flow sort of just stopped. I wonder if it's because suddenly we’re not exposed to other artists so it feels like you’re on your own.”

As a writer, Taxter can attest to Guede Ramos’s statement about difficulties of motivation during isolation. When DePauw dismissed students from campus in March, Taxter’s daily habit of journaling came to a halt. Looking back, she realized that her writer’s block stemmed from an inability to process everything she was going through. When she was able to start producing work again in recent months, she felt at peace.

The team’s ability to reflect and grow from struggles over the past several months is a testimony to the relevance of this year’s magazine theme. Sipes believes that change may be personal and relatively small, while transformation involves a collective shift in mindset. “There’s a communal or collective change going on with interactions between people, and that’s really what I think art and literature symbolize as fields of study.”

If you are a DePauw student interested in publishing work to the Midwestern Review, submit to https://mwr.submittable.com/submit/174643/midwestern-review-fall-2020