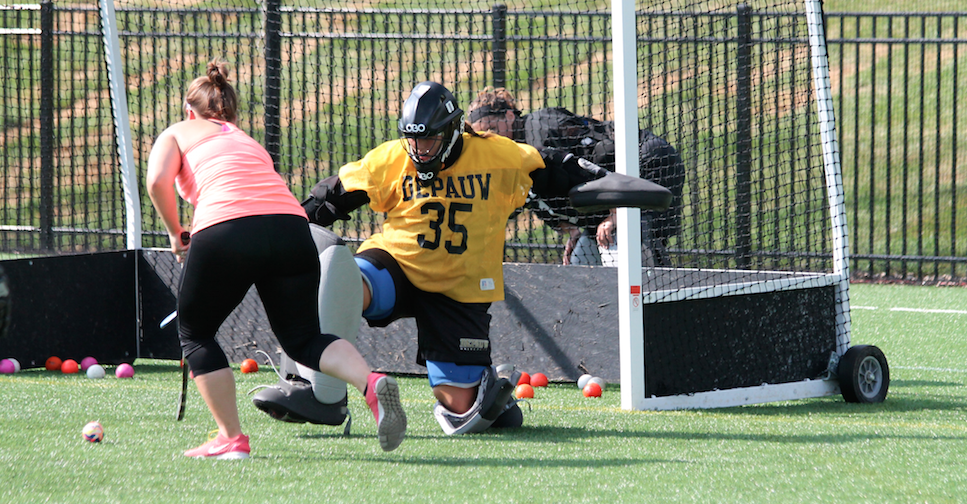 Senior Maggie Steele steps onto the newly constructed Reavis Stadium on Wednesday afternoon to practice for the DePauw field hockey team’s upcoming matchup with Christopher Newport University. After jogging two warm-up laps with the team, Steele breaks away for her individual workout.

She picks up a jump rope and begins quickly picking up her feet. Then she steps down into deep lunges, to warm up before suiting up on her pads to jump in goal.

Each day, Steele focuses on the little motions and skills that will help her achieve her number one goal: a shutout.

Steele started in goal her freshman year of high school in Cincinnati, Ohio, after playing lacrosse goalie for two previous years. She has never changed positions or even tried playing any other positions on the field.

“I like the pressure in goal,” she said. “I’m able to stand back there and see the whole field. My job is the last line of defense, but it’s also to let the defenders know who’s coming. I’m communicating with everyone, and I can see everything.” 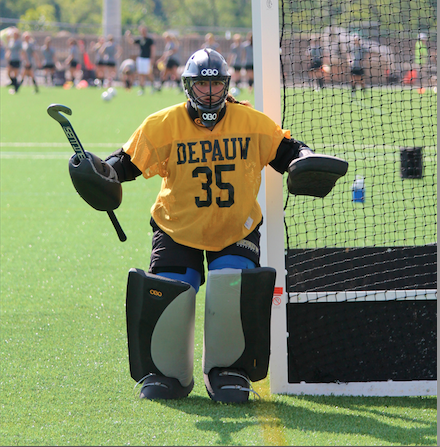 In her three years playing for the Tigers, Steele has put her name out there not only in the DePauw community but in the North Coast Athletic Conference and National Collegiate Athletic Association communities. She’s been referred to as “the cage of Steele” after she set the record for the amount of shutouts in a single season.

In her freshman year, Steele, the only goalie on the team, started in all 19 games, recorded 32 saves and tallied a 1.19 goals-against-average.

In the Tigers’ 2012 season, Steele recorded 15 shutouts and is credited with an NCAC-record and Div. III lead.

Last season, Steele ended the season with 10 shutouts and second in the NCAC Div. III conference with a .90 goals-against-average.

“The great thing about Maggie as a player is she always comes up when the team needs her to. She’s there, and she does a great job,” said Head Coach Gina Preston.

Steele quickly credits her 22 teammates as the reason for her success.

“We are a team, and we work really well together,” she said. “I couldn’t do anything without my defense. They are incredible. They don’t let many shots and make my job easy. This past weekend is a testament to that.”

In the team’s opening weekend against Hendrix College and Rhodes College, Steele only had to make a total of two saves. This coming weekend, the team faces Center College and Christopher Newton University.

Center back Kyle Maloney, senior, has played with Steele over the past three years, seeing her grow as a goalkeeper.

“We’ve had a strong [defensive] line for the past four years, and she’s pulled us all together when we were struggling,” Maloney said. “Maggie is the last person on defense who will stop the ball. She directs the defense in a positive way and helps us to be a cohesive unit.”

“Maggie sees everything and is able to communicate to the defense to make the system successful,” Taylor said. “They are able to work the ball all the way up the field. Skill-wise, she is able to commit to her skills she works hard.”

This is Thomas's first year at DePauw after graduating from Elmira College in June. Like Steele, Taylor also played goalie.

Steele still remembers her first game as a freshman when she let in eight goals, two of which she kicked in herself and another two that went right through her legs. 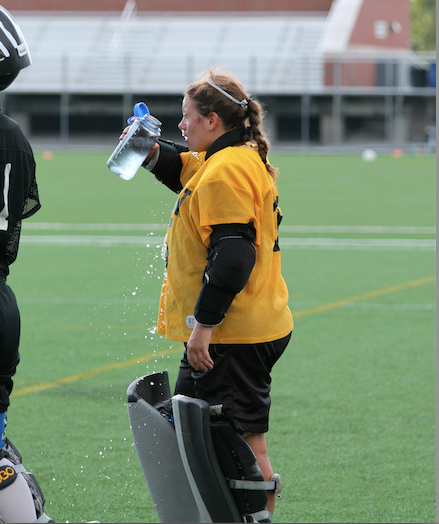 “That was a great starting point for me,” she said. “I knew I couldn’t do worse than that. As I’ve gotten older, I’ve gained more confidence. I know the team. I know the field. I can rely on my team, and my team can rely on me.”

Although Steele says that she has gained confidence in course of the last four years, she still has room to grow throughout the season, and Taylor agrees.

“Myself and everyone has room for improvement,” Taylor said. “For Maggie, I want her to keep getting confidence. She keeps her head up. The offense’s job is to score and goalies need to save. She needs to keep working hard, and she’s going to keep being successful with her keeping skills.”

Each day in practice, the team sets mini goals in order to focus on the present. Steele says each practice is different, focused on a different goal. The team works together to achieve the smaller goals to get to achieve the bigger one later on.

Looking at the rest of this season, Steele knows she will walk away proud, regardless of the outcome.

“I’ve had a ton of accomplishments in my past three years: I’ve set a record in shutouts; my sophomore year, I was the conference number one goalie with goals-against-average; the team has gone to the NCAA tournament twice; and sophomore year, we broke a school record by going to the national tournament for the first time,” she said. “No matter what happens this season, I will walk off extremely proud of what we’ve accomplished in my four years. As a senior, I expect to see great things this season.”