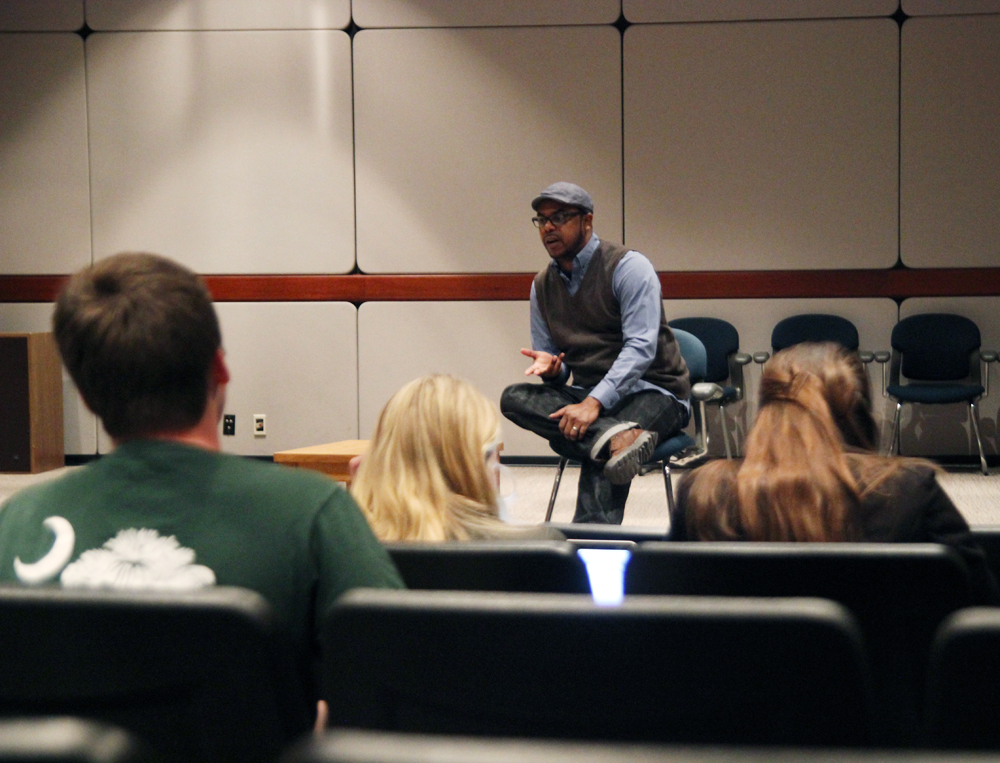 Journalist Brentin Mock speaks with a group
of Media Fellows on Monday afternoon in the PCCM.
SAM CARAVANA / THE DEPAUW

At 7:00 p.m. in the Peeler Art Center auditorium Monday night, Brentin Mock prepared to deliver a lecture titled “Justice Matters: 'To Pimp A Butterfly',” but some technical difficulties with the projector delayed its start.

As students and faculty continued to trickle in, professor Jennifer Everett read from Mock’s bio. “Brentin Mock is a Washington, D.C. based journalist who covers the intersection of civil rights and environmental justice for Grist,” Everett said.

Mock’s lecture is a part of the Environmental Fellows’ own lecture series, titled “What a Waste: Reclaiming the Value of People and Things.” More than just an environmental writer, Mock also has covered “the challenges presented by new voter ID laws, suppression of voter registration drives and other attempts to limit electoral power of people of color,” as Everett explained.

By 7:20, Mock decided to ditch the presentation, as no one could make the technology work. He thanked those who attended the event, complimented the campus’ beauty and promised he would be done in time for the NCAA Men’s Basketball Championship.

“I’m going to zero in on Eric Garner,” he said. He gave a quick recount of the story, describing Garner the way the newspapers described him, as “overweight man, selling single cigarettes” who “felt regularly harassed” by the NYPD.

“The cops put him in a chokehold, and he died,” said Mock. “His famous last words were ‘I can’t breathe.’”

At the time of Garner’s death, Mock admits he was “pissed off.” He said he didn’t want to talk about intersectionality, but he later had a conversation with a colleague that helped him understand the context of a larger social inequality at play in Garner’s death.

Garner’s official cause of death, Mock explained, was loss of breath, but Garner also had asthma. He also mentioned that Garner lived in a place in New York “burdened by pollution where a disproportionated amount of African Americans lived.”

“It was literally like there was racism in the air,” said Mock. He further explained how Garner’s death proves why black lives matter, and how when racial injustices occur, society cannot reduce each event to only what physically happened. “We have to look at the whole context,” commented Mock.

He frequently referenced “intersectionality” throughout his lecture, as the term orients the many social concerns of his work in spatial setting, maintaining each concern’s significance and its relation to the others.

The polluted air Garner had to breathe also contributed to his death, but Garner was not, and is not, the only person breathing that air. Mock saw Garner’s story as an “opportunity for environmentalists to understand why Black Lives Matter should matter to them.”

Mock took a brief detour and asked the audience what they thought was the number one killer of African American males over the age of 21. The answer is heart disease and cancer.

“We see on the news white on black crime,” said Mock, but he explained how the cause of death for most male African Americans had more to do with the environment, with air, water and soil pollution.

He transitioned to say that since January of 2014 alone, Brooklyn has recorded an alarming amount of oil spills within its boundaries. Mock then explained how Brooklyn, more than any other borough (excluding parts of Harlem), has the largest concentration of black people and other people of color.

Mock asked, “Why does this happen?” His answer: “The reason this happens is because these are the places people of color have been placed throughout history.”

Close to 8:00 p.m., Mock wrapped up the lecture and opened up discussion for questions. He admitted that the presentation meant to include more references to Kendrick Lamar’s most recent album “To Pimp A Butterfly.”

“[The album] was to say that a lot of African Americans have been rendered invisible through most of history,” said Mock.

Kendrick’s “To Pimp A Butterfly” challenges people to pay attention to “everybody.” Said Mock, “Our lives matter no matter what stage we are in."

Mock applied the natural themes of Kendrick’s album to his lecture. When an individual, a society or a government denies the significance of Black Lives Matter, according to Mock, “You are basically stepping on the caterpillar.”