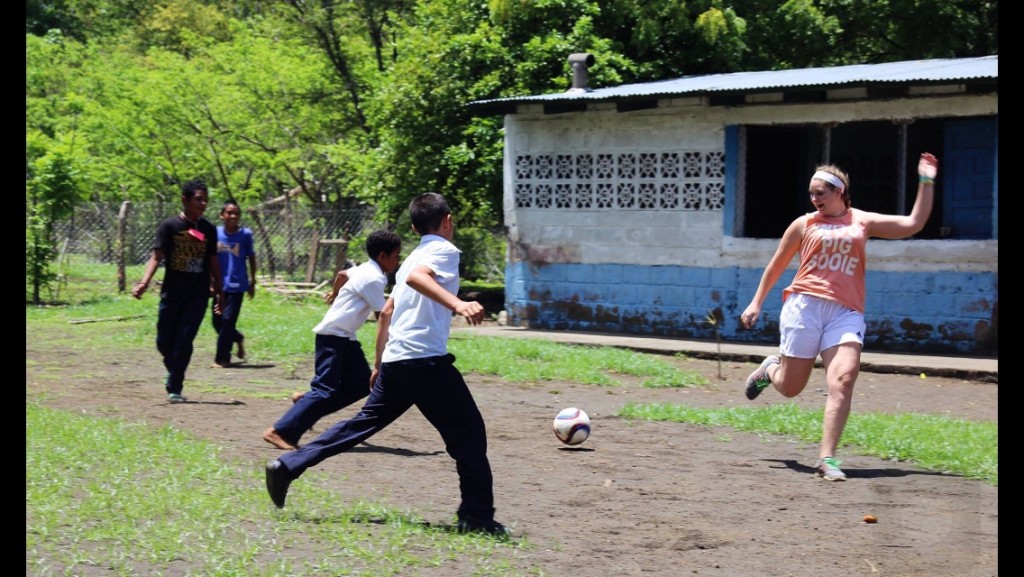 In June I spent 10 days in Nicaragua with a group of faculty and students from Tulsa Community College. My mother is the professor that leads this trip every summer and has been traveling to Nicaragua for the past three years. I decided to join her students as they worked with Just Hope, a non-profit organization that builds partnerships with communities in Nicaragua. Just Hope is an organization that was founded by Leslie Penrose in 2007 after she left the pastoral ministry to pursue the creation of global partnerships in Central America.

Just Hope is an organization that strives to move beyond the “missionary” paradigm and practice in global relationships. It instead promotes the mutual practice and paradigm of “partnerships” with four fundamental values and principles of global interdependence: solidarity, sustainability, mutuality and collaboration.

Just Hope is based in Chacraseca, Nicaragua. They have developed several partnerships in Tulsa, Oklahoma and throughout the United States and each year they help several different groups travel to Nicaragua.

Our group of 11 was a little unique. My mother is an associate professor of music and her goal is to build partnerships with music teachers and professionals in Nicaragua. With the help of her students she strives to bring art and music into local elementary schools throughout the Chacraseca community. Chacraseca is separated into sectors, and our group traveled to two different sectors and visited two schools over a four day period.

Throughout our time in Chacraseca we were accompanied by Otonial Flores Wong, a nationally recognized Marimba player, and Abimael Josue Gonzolez, a local music teacher. These musicians and teachers are striving to encourage more schools to incorporate art and music into their curriculum.

Nicaragua’s public education system is quite different from public education in the United States. The elementary schools have class in the morning from about 7 a.m. to 12 p.m. Each school has two or three classrooms and teachers to accommodate 30 or more children ranging from the ages of 5 to 12 years old.

Missing school isn’t a foreign concept to students in Chacraseca. Unlike a majority of students in the U.S. each student looks forward to going to school everyday. However, the attendance of each student varies. Many families, if not all of them, strongly rely on the help of their children to maintain their home, farms or small businesses. Therefore, if a student's parents need help their child will simply not attended school that day.

Every student is also required to wear a uniform: a white collared shirt with navy pants for boys and skirts for girls. Some children can only afford one set of clothes. Sadly, if a student’s uniform doesn’t get washed in the afternoon they can’t attend school the next morning.

The level of creativity varied from each school. In the first school it was evident that the teachers didn’t incorporate art or music into their curriculum. The students were incredibly excited to hold a musical instrument, learn rhythm patterns and help our art student, Karyn, paint a mural. However, there were a few students who seemed intimidated or disinterested in art and music.

At the second school, the teachers already had art hanging in every classroom and had taught their students songs. These students acted even more interested and had a greater patience for art and music. On the second day a group of girl students even performed a special dance for our group.

At the early age of six my mom signed me up for violin lessons and I played until I was 17 years old. Music and art have always heavily influenced my life and provided me with creative outlets; however, I also started playing soccer at the age of six and I fell in love with the sport. When I traveled to the different schools I always brought my soccer ball. At the first school I dropped the ball on the ground to a group of boys and we immediately became fast friends.

In Nicaragua baseball and soccer are two very popular sports, but not for women. Many girls are scared to play games with the boys. Nicaraguan culture is strongly influenced by gender roles and power dynamics. Growing up, my parents encouraged me to become a strong independent woman, physically and intellectually. When these characteristics were visibly seen in a machismo dominated community, like Chacraseca, many men were not only intimidated but they would make a silly remark about my strength or independent nature. Despite my characteristics, I am not as strong as some of the women I met in Nicaragua.

During my trip we met several women who have become financially independent with the help of programs sponsored by Just Hope. One of these programs is called “Microcredit for Women’s Enterprise.” This program was established in 2009 when 12 women decided they wanted to pursue their own small businesses.

The first group of women who created the microcredit program decided who is eligible for a loan, loan limits, interest rates and repayment schedules. The women have also practiced “social collateral;” this means that if one woman fails to repay her loan every other women in the group is held responsible for her debt. The program has been a success; the repayment rates have remained steady at 100%. Today the microcredit bank not only helps more than 150 women gain financial independence but it also empowers women to break gender norms.

Traveling to Nicaragua was enlightening and eye opening. I left the United States satisfied with my life. I reentered the country feeling extremely lucky because I know I impacted the lives of others and also learned a lot about myself. I learned that I can survive 10 days by the equator without air conditioning and drinkable water.

I also witnessed the true meaning of William Arthur Ward’s words, “a warm smile is the universal language of kindness.” A smile is not shared in Nicaragua just to be polite; the people are genuinely kind and compassionate. I was fortunate enough to step out of my comfort zone and my air conditioned office where I am interning for The Frontier, a local and statewide news website based in Tulsa, Oklahoma.

Although you might have already taken your summer vacation or made plans to, I challenge you to begin planning for winter Term, May term, a semester abroad or even next summer. People attend college to receive a higher education, but it is also an opportune time to learn a little, or a lot, about yourself and others. So word of advice, don’t step out of the bubble, go beyond it.