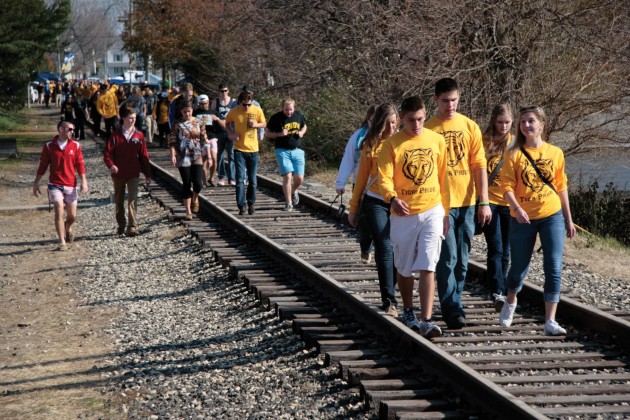 related arrests – three involving students – and at least six alcohol violations by Public Safety officers, DePauw’s campus was relatively quiet for one of the most notoriously rowdy weekends.
Public Safety did report at least nine alcohol violations, but no arrests of students on DePauw’s campus. At least four hospital runs related to alcohol occurred over the weekend, although two of them were visiting, non-DePauw students, according to Angie Nally, director of public safety.
Nally admitted that the misconduct was down Saturday because the game was away at Crawfordsville.
She said that all of the arrests that happened during last year’s Monon weekend at DePauw, occurred during the vicinity of the game and at tailgates surrounding the stadium.
She also said the Saturday night of Monon tends to be quieter because students and guests are tired from the day’s activities.
At Wabash, Joe Haklin, director of athletics and campus wellness, said the college had 40 to 50 additional off-duty officers to patrol the campus and stadium. Wabash does not have a campus police force like Public Safety at DePauw so the college used the security company TL Enterprises Inc., Nally said.
Haklin said he was responsible for all safety and security within the stadium. He said from his perspective, there were no reports of any problems within the stadium. He said that much of the conflict was avoided between DePauw and Wabash fans because the schools made decisions beforehand to “separate the populations from the start of the day, to the end of the day.”
Haklin said he could not speak for the rest of the tailgate as Richard Woods, director of safety and security, was responsible for monitoring security outside the gates. Woods could not be reached upon completion of this article.
Sophomore Gregory Devonshire was a risk manager for Phi Kappa Psi fraternity during the game and said the Wabash police officers were generally tolerable of the students.
“I was out tailgating all day, so I made friends with all the police and security there,” Devonshire said. “It seemed like they were not really there to bust people, but they did step in at the end.”
Devonshire said he did see two police officers give citations to freshman girls for underage drinking, but said they only did it as students were beginning to become too “rowdy.” He said near the end of the day, students were throwing full beers and jumping in front of cars.
Sophomore Henry Binning was a risk manager for Sigma Chi fraternity and said the students and police officers seemed to mesh okay during the game.
“We were under the impression, that the police were going to be pretty lenient, and I thought that was the case,” Binning said. “I heard people got arrested, but I didn’t see anything. No one from our tailgate was arrested – partly because the plan the risk managers set up. We really planned out how we were going come across publicly.”