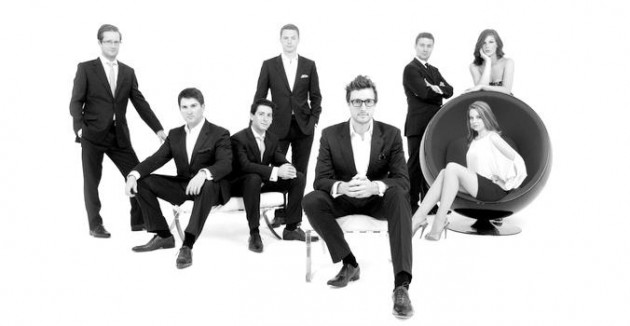 VOCES8, an international award-winning cappella octet from the United Kingdom, will visit campus and pair with DePauwCappella for a Guest Artist Series concert Wednesday, Oct. 10 at 7 p.m.
The concert, originally scheduled for 7:30 p.m., was moved back to allow students to attend both the concert and the Greek God and Goddess dance competition later that evening.
Dean of the School of Music Mark McCoy chose VOCES8 as a part of the Guest Artist Series because of their appeal to a young audience. As young performers themselves, they have the reputation of connecting with a those who aren’t connoisseurs of classical music.
“They sing renaissance madrigals all the way up to Michael Jackson and Ben Folds,” McCoy said. “So it is such a wide variety of music, there is something for everyone.”
Tickets are free to all students, and they are encouraged to get them online prior to the concert as the performance is anticipating a large crowd once again. Project TRIO, the first performers in the Guest Artist Series this year, drew in 750 tickets. Students accounted for 450 seats, with College of Liberal Arts students filling 300 of them.
“Cleary music is coming to life on the DePauw campus,” McCoy said.
McCoy’s goal is to extend the reach that music has had on the campus thus far and make Greencastle a destination for big names. According to McCoy, the success of Project TRIO has already begun to spread DePauw’s name as a venue for performers.
He hopes that the rest of the Guest Artist Series continues to draw in an excited audience and enthusiastic performers. Throughout the rest of the semester, students will also be able to attend concerts by Time for Three and The Canadian Brass.
“My biggest goal is to see DePauw light up with music and to see both School of Music students and College of Liberal Arts students and faculty and staff and community all come together and celebrate some great music,” McCoy said.
DePauwCappella will also be performing at the concert.
McCoy contacted DePauwCappella President Lukas Meyer, senior, to act as the opening performance for the internationally-recognized British a cappella group.
“I decided on DePauwCappella because this is really an effort to bring the School of Music and the College of Liberal Arts together,” McCoy said. “By having DePauwCappella as the warm-up group, folks will see that the School of Music is reaching outside of their domain to make sure that music is in all of our lives.”
DePauwCappella will begin performing at about 6:45 p.m. in the Great Hall. They will eventually make their way into Kresge Hall for the remainder of their performance.
“We were all thrilled when Dean McCoy contacted Lukas about it [performing at the concert],” said senior DePauwCappella member Lauren Reed. “We could not be more excited.”
Reed sees the draw of these events in regards to that goal.
“I think we’re really lucky to be at a school where we can have concerts like this, and we’re allowed to attend as many as we want for free,” Reed said. “I hope students take advantage of that. People should attend because it’s an opportunity for CLA students and School of Music students to come together. Plus it’ll be fun.”