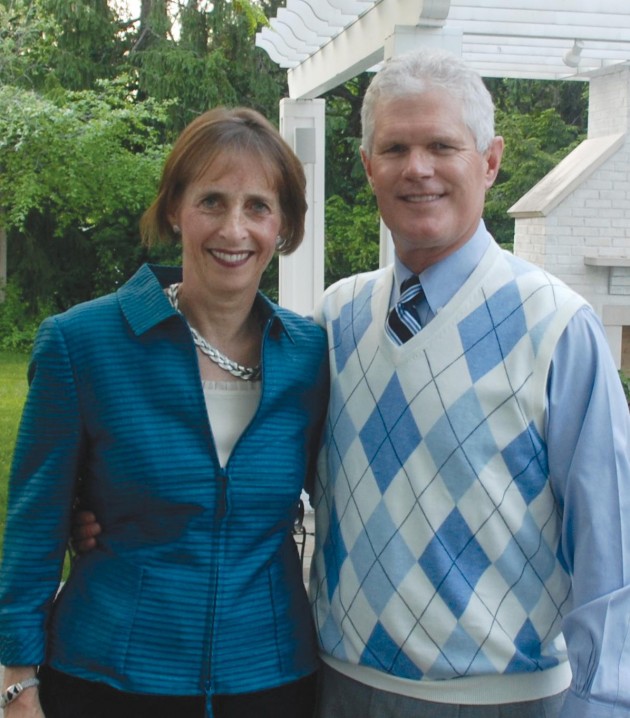 DePauw’s to-be dining facility, R. David and Suzanne A. Hoover Hall, received another boost Thursday after three DePauw alumni donated $2.5 million towards a faculty dining room and gathering space within the new hall.
President Brian Casey announced today that Sarah and John Wallace (both ’76) gave $1.5 million and James B. Stewart ’73 gave $1 million collectively to contribute towards what will be the Wallace-Stewart Faculty Club within Hoover Hall. The space will be separate from the main dining hall and reserved for faculty to meet and engage in conversation with their fellow professors or just simply grab a bite to eat. And while the place is called a club, President Brian Casey said the term is more a matter of tradition as universities across the United States like Harvard, Yale, Indiana and Denison all have faculty clubs.
Sarah Wallace is the chairwoman of the university’s Board of Trustees and said she has always had great relationships with professors at DePauw, but became very close with a few faculty members when she chaired the university’s search committee for a new president after President Robert G. Bottoms retired in 2007. She said this gift was a response to the knowledge that professors on campus, “don’t have a place that they can interact with each other or could take students if they wanted to continue a conversation after class.”
“It’s wonderful,” she said. “There is more being done between the curriculum between the disciplines, and it’ll give them a place to go and talk about it.”
Wallace said the decision to make the donation with Stewart came from their belief in the faculty. She called them the university’s “life-blood.”
“We wanted to really improve the quality of life for our faculty members,” Wallace said. “There was a desire to have a place that they can go and enjoy each other.”
Casey said the administration recognized the need for a common place for faculty to meet and eat during the early stages of the university’s master plan. He said most professors actually eat lunch at their desks.
“There is enormous value in having a biologist sitting next to an art history professor sitting next to an economist,” Casey said. “Particularly at a liberal arts college, there is enormous value in having them talk to each other.”
Another function of the club would be a place that faculty could take one or two students, or a whole, class to continue a conversation.
“The dream situation is your having a class, and it’s a terrific seminar and the faculty member says, ‘why don’t we continue this in one of the other rooms up in the faculty club?'” Casey said. “If we can get faculty out of their building into the middle the campus, the amount of social interaction that will happen will be dramatic.”
Sophomore Amelia Marvel said she is interested in the idea of meeting professors outside of classroom.
“I think it would be a good way to get to know professors,” Marvel said. “Not necessarily on a personal level, but in a different environment.”
Sophomore Ella Smoot was also intrigued with the idea of the club and said the faculty club would serve as a nice intermediate between a place like a cafÃ© and a professor’s home.
“My professor invited us all to dinner, but that’s more personal than going to a place like the Hub,” she said.
No date has been set for the start of construction on Hoover Hall, which will be located on East College lawn between the Student Union Building and Burkhart Walk.
Sarah Wallace is the chairwoman of the board of First Federal Savings and Loan in Newark, Ohio. John Wallace is a practicing dentist in Granville, Ohio. Each of their three children attended DePauw.
Stewart is a Pulitzer Prize-winning journalist and the author of the “Common Sense” column in The New York Times and is the author of nine books.