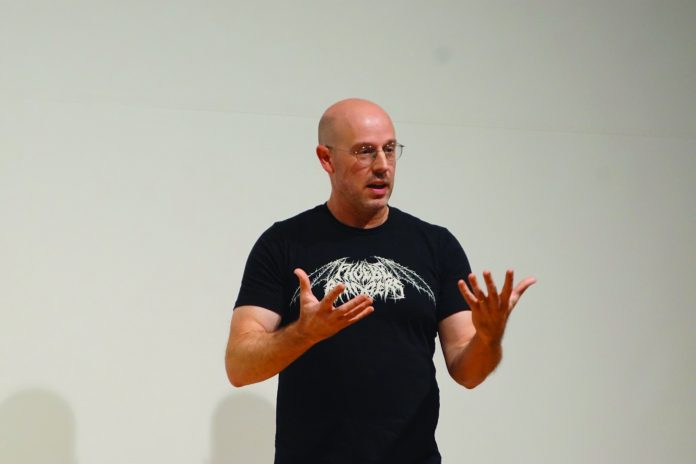 On Friday, Sept. 23, a screening was held for the film “So Cold The River” directed by Paul Shoulberg. The movie was an event of its own, but the real experience was getting the in-depth discussion with Shoulberg.

“So Cold The River” was Shoulberg’s first large project with a budget of $2 million. His other projects are award winning “Walter” and “The Good Catholic.” Coming from a history of indie films, Shoulberg was used to working with around $400,000. He mentioned  there were struggles  with the higher budget  for the film, and Shoulberg almost cut the budget close. Using elements of larger films in this project to fit in this higher but relatively low-budget film was a struggle. There were many elements  Shoulberg and his cast had to learn how to deal with.

Shoulberg was upfront with his frustrations throughout the filming process and seemed to let these pent-up feelings loose. Little things he never thought about before came into play such as blood, water affects, shooting time, and more.

Shoulberg spoke very highly of his coworkers on the project. The questions asked allowed Shoulberg to credit his choreographer Madeline Kann.

Kann’s appearance does not discredit her work as Shoulberg shares how much work she put into this film. Every bit of lighting was controlled by her entirely, and she helped run the movie and contributed to some of its best aspects.

Along with his choreographer, Shoulberg spoke about the novelist he worked with, Michael Koryta. “So Cold the River” is originally based off of a novel and the original author was there to make sure it stayed as accurate as possible. The novel was over 500 pages transformed into this film with a few changes to fit the budget. One change that was peculiar was getting rid of the ending scene where a truck goes into a tornado. Even with the smallest of changes, Shoulberg had to make it clear from the start the novelist was still there for the whole ride.

Overall, Shoulberg made it clear he loved the movie-making experience. The audience asked very captivating questions that he answered in detail. One question that was the most drawing was his opinion on story telling in recent horror media.

He gave his opinion on his favorite part of directing and filming along with his horror movie opinion.

Shoulberg said, “I love throwing three people into a room and telling a story. My favorite part about a film. I love horror. One of the few genres left continuing to evolve.”

The movie screening made for a nice transition into meeting this director. It may not have been a Friday the 13th screening, but it was still an engaging experience. This opportunity provided a real look into understanding a director's point of view with the translation into big budget films after leaving the college indie film scene.