Comedians Scott Blakeman and Dean Obeidallah brought religious and political awareness in the form of comedy to DePauw’s Thompson Recital Hall, while also poking fun at the University’s environment.

The duo made their latest stop on their “StandUp for Peace” tour this past weekend, promoting and embracing their slogan that “if we can laugh together, we can live together.”

Blakeman and Obeidallah set the tone and purpose of their show quickly. “I think [the show] is important because we get so uptight about things that we can’t joke around,” Obeidallah said. “I think it shows humanity, and it shows this commonality when we joke around playfully with each other. It comes from a good place, not a hateful place, and that’s important.”

Blakeman, was a mentor for Jon Stewart and Chris Rock and a frequent news contributor to outlets such as MSNBC and Fox News, represents his Jewish background through his comedy. Obeidallah, a Muslim New Jerseyan, works with Comedy Central and hosts his own SiriusXM comedy show where he frequently discusses his religious background.

The unique stand-up comedy duo first met when they were neighbors in New York City. Both wanted to promote the concept that people from contrasting backgrounds can work together despite differing perceptions of religion or ethnicity. While embracing their own flair of comedy, the duo uses their differences to fight against politically-driven opinions to focus on basic humanity as a means to bring people together.

Mark Covitz, assistant director of spiritual life and Jewish life chaplain, planned and organized the show. Covitz thought that comedy was the key in reaching out to the DePauw audience and making an impact. He valued Blakeman and Obeidallah’s positive message and the way that it is conveyed through comedy.

During the show, Blakeman confirmed Obeidallah’s views as he restated the significance of creating a sense of togetherness. “The idea is that we’re more similar than different,” Blakeman said.

Obeidallah exited the stage, allowing Blakeman to begin his solo act. He opened his set with a jab at the DePauw community and the prevalence of Greek life on campus, which was received with laughter from the audience, a majority of which were students.

“I think DePauw is a great example of coexistence because we have about 3,000 fraternities and sororities and everybody gets along,” Blakeman said. “There’s no wars, at least to my knowledge, and you don’t see any invasions of Kappa [Kappa Gamma] or anything like that. Already it’s a great role model.”

Joking about new health care proposals, marriage equality, and President Trump, Blakeman sought to educate students on the hypocrisy, inequality, and polarization surrounding these issues through the use of comedy.

Blakeman poked fun at President Trump’s lack of minority representation in his cabinet picks, stating that “they [cabinet picks] are diverse in the reasons of why they are unqualified.” He then went on to comment on the social opposition to gay people serving in the military, saying, “I don’t think we’re being shot and bombed at for people’s romantic intentions.”

Politically-centered humor also comprised Obeidallah’s set. He made points about the negative generalizations towards immigrants, overarching criticism of President Trump, and the rise in Islamophobia.

Obeidallah tackled the problem of increased Islamophobia at its root with many people’s lack of personal friendships. “Only 32 percent of Americans know a Muslim,” Obeidallah said. “So if you’ve never met or don’t know a Muslim, and all you see is ISIS doing horrible things, it makes sense you’re not going to like us.”

The comedian continued to stress the importance of dismantling social constructs and getting to know people outside of one’s comfort zone. “That’s why I try to break down stereotypes, and comedy is my way of talking to you,” Obeidallah said. “I want to be your Muslim friend. Polls show that when people know a Muslim, they have a 20 percent more positive views of Muslims and Islam.”

Blakeman and Obeidallah concluded their set with a joint question-and-answer section. School of Music Professor Kristina Boerger inquired about the future role of comedy in an increasingly political climate. “The first job of a comedian is still to be funny; we comedians are not journalists, we are commentators. All we can do is raise awareness and hold a mirror to ignorance and politicians,” Obeidallah said. “The people will listen to a comedian over a news story. It’s cathartic, it’s a release. It doesn’t change policy on its own, but it reaches people and mobilizes them to act.”

With the rise in the demonization of minorities, Crovitz believes that it is important to find a common ground among groups. “It’s really hard to hate people when you talk to them as individuals and see them as a human beings,” said Crovitz. “You can’t wait for bad news to happen. Scott and Dean have a really positive message about people getting along, and you take action when things are good and you don’t wait for trouble.” 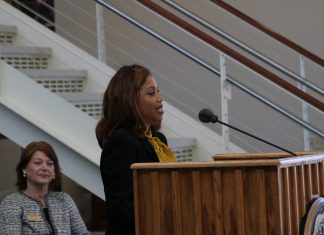 Ian S. Brundige - July 1, 2020
0
President Lori White officially begins her tenure at DePauw University today, July 1. The day is being commemorated with a virtual gathering on the...

Respect the Dough, Respect It