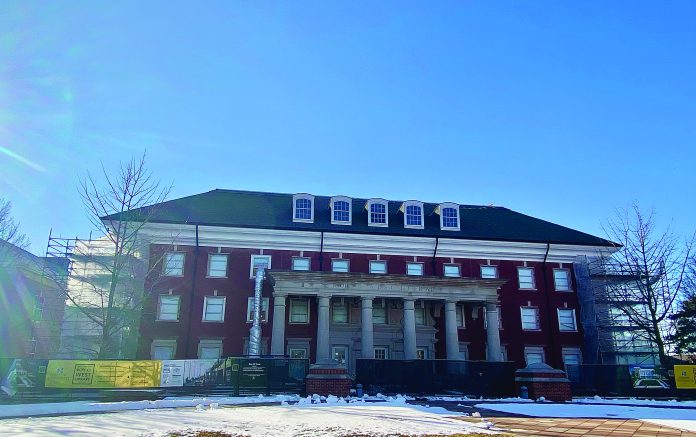 Reconstruction on the Roy O. West Library is expected to be finished by December 2022 at the earliest. The facility has been closed since the start of the COVID-19 pandemic in March 2020. In years past, the ceremony has taken place in the academic quad by Harrison, Asbury, and the library. The commencement ceremony will not be held in front of Roy O. West this year.

Brooke Cox, who took over as Associate Dean of Libraries for Mark Provine in January, said that there are a variety of reasons for the prolonged reconstruction process, including a couple of different timelines.

“It’s been kind of up and down with the economy, we had a change of presidents when we moved from Mark McCoy to Dr. White, so there was a pause in there. Obviously COVID-19 created another pause, but we are fully on schedule with the current restart,” Cox said.

The current schedule will allow students to use the updated facility in the spring semester of 2023 if there are no more interruptions. The project originally paused in the fall of 2017, and was restarted in December of 2019, before COVID-19 closed Roy to the public.

“We (originally) should have opened two academic years ago. The timeline was the same, but the start was delayed. I taught library sessions where I told students ‘we’d be open and ready,’ but there were delays beyond construction. The board of trustees made a change in start date,” Cox said.

Cox said that interior work caused the building to be closed during the 2020-2021 academic year.

Although there were many factors that delayed reconstruction, Roy O. West has not been affected by supply chain issues for the time being.

Another issue regarding the construction of Roy O. West pertains to graduation. In years past, the ceremony has taken place in the academic quad by Harrison, Asbury, and the library. The commencement ceremony will not be held in front of Roy O. West this year.

Betsy Demmings, the executive assistant to President White, said that “with the library still under renovation, the plan is for commencement to be held on East College lawn facing the Emison building, the same location where the inauguration of President White was held.”

She said the location is still subject to change.

Students on DePauw’s campus have been without a large library for over two years, which has invoked frustration amongst some.

Madeline Humphreys, junior, said, “I pay the same amount of tuition as the students who will have access to the library for all four years. I feel like I've been cheated a little bit. The library is such an important part of the college experience that I have barely gotten to have.”

Humphreys said that although there are alternative libraries, they are typically smaller, more crowded, and never quiet. Since she lives in a Greek house, like many students on campus, it is almost impossible to find a place that isn’t distracting to work.

“I don’t like a lot of people to be around when I study, and I don’t like to study in my room, since I sleep there. I have been having a pretty hard time finding somewhere that people aren’t walking by and distracting me,” Humphreys said.

“It’s been really frustrating, especially as a senior. This has been one of the hardest times with applying to grad school alongside senior seminar. It’s become more of an extra hurdle for a lot of us,” Bell said.

Bell said that since Roy O. West is closed, DePauw should be better utilizing available spaces and give students access to better locations.

“The academic buildings have been closed on Saturdays and Sundays. For example, the library, to my knowledge, was never closed at those times,” she said.

Last semester, Bell made arrangements to take her GRE (general record examination), in a classroom she rented on a Saturday morning. When she arrived, the building was locked, and she had to take the four hour exam inside of her crowded sorority house.

Since Bell is a senior, she will never get to experience the new facility.

“For me, and a lot of students that need quiet areas in order to concentrate, it’s just become almost impossible (to study) without the library,” Bell said.