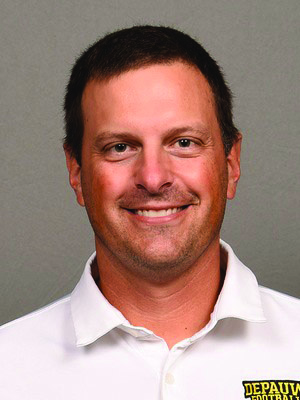 This year's Monon Bell game will be head coach Brett Dietz’s first time handling one of the oldest college rivalries in Indiana. When a new coach prepares his players for such a high-stakes game, mental and physical preparation comes down to a few simple strategies to ease the mind, according to Dietz.

The week's excitement, preparations, and pressure will hopefully lead Dietz and the Tigers to one last win of this season, giving them a perfect conference season record of 9-0. It’s no small task, but getting acquainted with the players and instilling a positive mindset are the keys to the Tiger’s success this year.

“[Before a game] we try to get [the players] to relax a little bit. They want to win, they want to play well,” Dietz said. “If we can just focus on the task at hand and not get worried about the results of the end game… then everything else will take care of itself.”

Although it’s Dietz’s first season as head coach, he’s fully aware of the pressure put on the Tigers to play a perfect game this Saturday in the fight for the Monon Bell.

“They're still allowed to make mistakes. There's going to be mistakes in the game, but it's about how we react to those mistakes, and not get down on ourselves. We have to keep a positive mental attitude and just move forward to the next play,” he added.

Senior quarterback Chase Andries has noticed a new kind of mindset on the field for the Tigers, which he credits to the new culture that comes with a new coach.

“Since Coach Dietz came around, it's a lot more high energy, there's higher expectation,” Andries said. “We're just at a different level of play right now, and it's nice that the fifth-year guys are able to see the difference; not just in the win column, but also the work that goes into being a team that's at the top of the conference right now.”

The Tigers have shown great results from this new high-energy culture, reviving the football scene after 11 years of missing the conference championship.

With last weekend’s 66-13 win against Oberlin, the Tigers are now in the conference playoffs. Although the spot in the playoffs is secured, whether the bell stays at DePauw or migrates to Wabash is a championship in itself.

“There's going to be a little bit of pressure, maybe some excitement, some anxiety when you're going to be that close to accomplishing your goals,” Dietz said. “Now that we won the conference, hopefully the wave of that is gone. And now knowing that, win or lose, we're still going to the playoffs.”

Dietz’s philosophy on goal-setting and hard work has certainly paid off on this year's players, not only as athletes, but as teammates. According to Andries, there is a significant change in attitude on the team and positive change has come with Dietz’s leadership.

“Having the group of fifth-years see the change in culture and energy around the program really helps drive that notion that DePauw football is going to come up, and we're here to stay,” Andries said.

The pressure can naturally cause some stress on the players. But in Andries’ senior season, the expectation to bring home the win can tarnish the fun. According to Andries, the game is worthwhile when players allow themselves to enjoy themselves, soaking it all in rather than suffocating under pressure.

Luckily, coach Dietz offers a helpful mindset for the players to ease these tensions. Maybe winning the bell doesn’t need to be over-thought after all.

A fresh perspective can do a team well, and the Tigers have proven that a change in leadership can make an undefeated team and energetic environment for players.

“We're playing really confidently right now, and I think we have the ability to overcome adversity because of our successes this year,” Dietz said. The Monon Bell game will be held at Wabash College on Saturday, November 13 at 1:00 p.m.