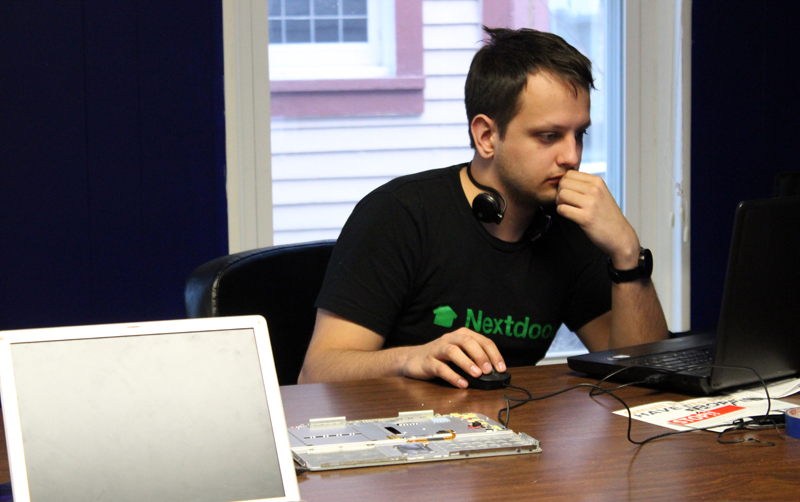 Vince Aguirre works on his computer momentatily
while repairing a computer. WynWay offers a number of technology services
including cellphone and computer repair.
ERIN O'BRIEN / THE DEPAUW

Senior George Velazquez, Jr. is familiar with technology, to say the least.

Before his junior year of high school, he started his first business, “IT’s For You”, and had a steady clientele of family and friends upon entering DePauw University. His freshman year was constantly spent helping floor mates and classmates with their technological needs. Now he’s an owner of WynWay Technoloigies in downtown Greencastle.

“From the very beginning, it was about providing these services for a low affordable price,” said Velazquez Jr. “I believe in my heart that people deserve these services… that it shouldn’t be about how much money you have to get them.”

Velazquez officially started the business with Vincent Aguirre and Michael Woodsmall, who also had their own companies. Wynway became the product of these three companies put together.

“In 2013, [I] got recruited to come back to DePauw to work, so that’s when everything clicked,” said Aguirre, who graduated from DePauw in 2012. “When I came back down here, George told me what he was thinking about building… that’s when I jumped in.”

The business would eventually go on to be founded in October of 2013.

But what exactly is WynWay Technologies? For Velazquez, it’s a relatively difficult question to answer.

“It’s complicated to explain because we do so much,” Velazquez said. “Sometimes we want to be more vague than specific. We’ve seen people come in to get an iPhone repair and take their computer to somebody else. So the way we explain it is that we provide technology services for Putnam County.”

“I want people to think… whenever they have any issue with technology, think WynWay,” said Aguirre. “ I want us to be able to encompass anything involving technology.”

Despite having frequent trouble in defining their business, WynWay’s motto sums up Velazquez Jr. and Aguirre’s intention perfectly: "Let us handle the technology."

Their services include iPhone repair, computer repair, software updates, and in-home visits. On top of that, they’ve been able to provide websites for the city of Greencastle, the chamber of commerce, the Putnam County public library, and non-profit organizations. Having only been around for a little over a year, WynWay has come a long way.

But how does a small business like WynWay survive in a media-driven world that relies heavily on well-known brands such as Verizon, Apple, and Best Buy? Luckily for WynWay, its Greencastle location keeps them out of reach of these big companies.

“I would say the greater competition… is the bigger chains that are all an hour drive away,” said Velazquez. “What we kind of promote is that we provide convenience… For the quality we’re providing, you’re not going to find a cheaper cost.”

As a young company, WynWay has plenty of time to grow. As of right now, the focus is still very simple: to get the brand recognized in Greencastle to “provide sustainability”.

“We’ve had ups and downs over the past couple years,” said Aguirre. “The most important thing is getting things right here… making sure we really understand how we operate.”

But both Aguirre and Velazquez eventually want to expand outside of the town.

“There’re some key areas that I want to focus on… Crawfordsville, Cloverdale, Terra Haute… These places are going all the way to Indy or Avon,” said Velazquez. “Getting them to come here [will] not only help WynWay, but it’ll help the community to because it will bring more money into here.”

The possibility of WynWay’s future expansion will create more openings in the business, which in part will lead to job opportunities for DePauw students.

“I love getting DePauw students involved,” said Aguirre. “It’s been kind of an experiment trying to figure out the best way to do it. I think no matter where we expand to, getting students involved is definitely important.” 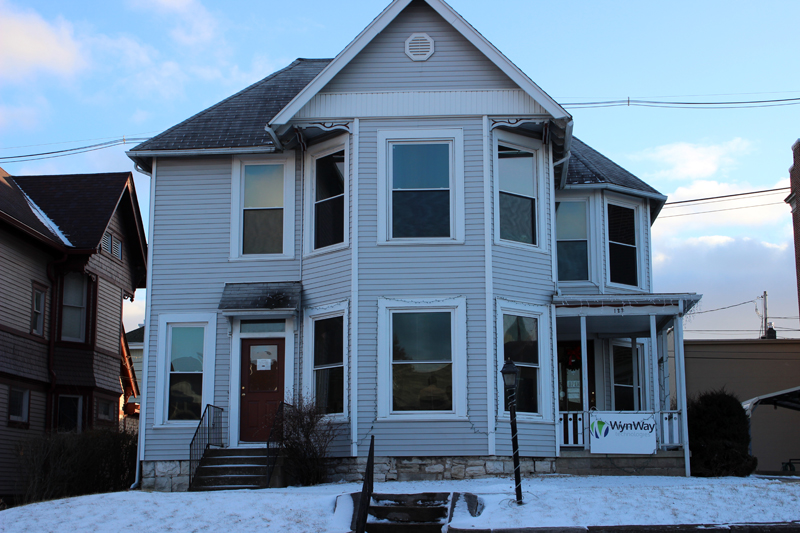 WynWay is located 122 East Washington,
only a few blocks from DePauw's campus.
ERIN  O'BRIEN / THE DEPAUW

ITAP (Information Technology Associates Program) is one of DePauw’s programs that WynWay is considering incorporating into the company.

“What would be cool is if we could provide… a space for the ITAP people to work,” said Velazquez. “You can easily get stuck in the DePauw bubble, but bringing you out here, dealing with real clients… people from the community… that’s experience. It’s very powerful and it goes way beyond your degree that you’re going to get at DePauw.”

WynWay has already redesigned the interior of their building, where they have recently added a 15 feet high, eight feet wide white board, which they say is the biggest whiteboard in Putnam county. They will use it to sort out ideas and lead workshops, along with opening the board up for public use.

“There’s only so much you can do on a piece of paper or on a computer,” said Aguirre. “It’s kind of common for other technology companies to have white boards for problem solving. I think it really just puts us there on that edge.”

It’s hard to tell what WynWay will be in five, ten, even fifteen years. For now, all there is to do is sit back and let them handle the technology.

For more information, visit WynWay’s website or email them at contact@wynway.com.