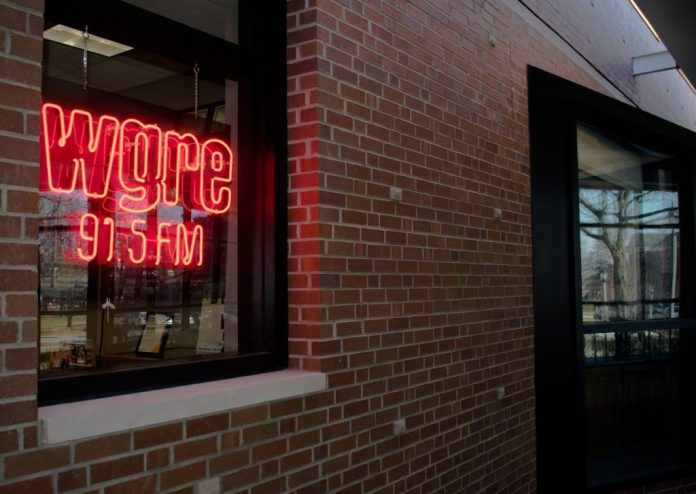 DePauw’s student-led radio station, WGRE, acts as a hub for creativity and self-expression for those involved. It is often forgotten that students are more than just students, and nowhere is that truer than in college. When they’re not being bombarded with classwork, papers, and exams, college kids search for an outlet to express themselves for something more than just earning a grade. For many DePauw students, WGRE is that outlet. There, students are allowed to host shows, play music, and even hold leadership positions to ensure that the station runs like a well-oiled machine.

WGRE could not exist without the participation of the countless people involved. Among others, the staff is made up of DePauw students who serve as directors, DJs, and hosts.

Senior Durin Hendricks, WGRE’s program director, has a great deal of responsibility and influence when it comes to the station. Hendricks has a large part in scheduling shows and managing the staff directors as well as student DJs. He also takes the lead on sending out emails, coordinating the music log, and often can be found covering shows and overseeing transitions. Hendricks emphasizes that while he is in charge of a lot of things at WGRE, he couldn’t do his job without the help of the staff.

Another WGRE leader is Shelby Schoen, a senior who is currently in her fourth semester working with the station. Schoen is the music director, meaning that she is directly involved in adding music to WGRE’s database, as well as selecting and promoting things like “Artist/Song of the Week”. While she would normally be very physically involved in her duties, because Schoen is living on campus, her role has changed. “I’m still the one who’s finding the songs and choosing what songs go on air,” she explained, “but I’m just not the one who’s been manually putting them in anymore.”

Ben Herron, another senior, holds the sports director position at WGRE. In this position, Herron covers all things sports which, during a regular semester, might include reporting on DePauw sporting events, connecting with coaches and athletes, and hosting multiple shows detailing everything important happening in the sports world. Currently, Herron hosts two shows, one which covers sports news extending from high school all the way to national events, and the other which focuses more on sports occurrences taking place at Depauw. A lot of his job at WGRE involves “reaching out to people… collecting interviews and finding stories.”

Amidst COVID-19, transitioning to the remote space is a hurdle that all of DePauw’s organizations have had to jump through. WGRE is no exception, as a handful of adjustments have been made to accommodate for the ongoing pandemic with the main change being the inclusion of remote shows.

Hendricks explains that WGRE has always had the capacity to play pre-recorded shows, but the option was rarely, if ever, used. WGRE prides itself on being a campus radio station at DePauw, so nearly all of the broadcasts were done live on campus. However, since being at DePauw, physically, isn’t a possibility for many students this semester, though, many off-campus DJs are still able to participate with pre-recorded shows.

WGRE staff explains that the change to pre-recorded shows has been a majors shift, often putting them outside of their comfort zones. Veteran DJ Sammie Waples describes that one of her favorite parts of being a DJ was learning to physically use the technology. Because she is a remote DJ, however, she is missing “being in the booth.”

Waples also mentions that DJs now use a software called Audacity to record and edit their shows, which she’s taken a liking to as well. “I have fun with the remote radio show because the thing that’s different here is that you can redo stuff.”

For some, like Herron, hosting remotely means that the process of getting interviews has changed a lot. Since one of Herron’s shows normally involves DePauw coaches and athletes coming into the studio to be featured as guests, not being on campus has been a big shift. Herron said that, in the past “I could literally just see them walking around campus and ask them to come on Tiger Talk,” but now a lot more formal scheduling is necessary.

Schoen said that while the transition to working at the station remotely hasn’t been easy, she’s seen some benefits. Because her position requires a lot of hands-on work that she isn’t able to do from home, Schoen says this limitation has made “WGRE less of a workload than it normally is.”

Hendricks has also seen some positives come out of the adjustments made because of COVID-19. While he mentioned that pre-recorded shows had always been an option, utilizing it more out of recent necessity has actually opened the station’s eyes to a great strategy that they hope to implement more in the future.

The “Student” in Student Media

The beauty of WGRE and organizations like it is that they are almost entirely run by DePauw’s students. This means that it is also important to recognize that the staff is balancing their work with WGRE and their academics lives. For some, being involved in the school and the station is simple, but it’s been challenging for others.

Schoen explains that she’s faced some difficulty juggling classwork and WGRE responsibilities because of her grade. Since this is her senior year, the problem she runs into is mainly having “I’m in my senior seminar this semester so the workload gets kind of heavy.”

For junior DJ Waples and her co-host Grace Lang, however, the struggle is more in the realm of time management. The express how a regular DJ shift would normally only take an hour, but since remote shows involve multiple takes, music downloading, and editing, “It takes a lot of your day.”

The two juniors are the hosts of a remote radio show, this being Lang’s first time as a DJ and Waples as a returning member of the team. The two have been exploring how they want to fill their hour of air-time, curating music that “sounds good together” and even beginning to establish themes for each show. “We haven’t figured out exactly what we want to do,” Lang said, “but we have a lot of ideas and we’re considering a few possibilities.”

For some, like Hendricks, the remote space has actually benefited his ability to do schoolwork. Hendricks, who is currently on campus, mentions that online classes means they can be done from the DJ booth when needed. “There have been times where I needed to cover a show,” he said, “and I was in class at the same time… I’ll just casually drag over songs and make sure stuff gets played while still being engaged with the class itself.”

The Importance of WGRE and Student Media

As WGRE and organizations like it continue to thrive, even in the most turbulent circumstances, it becomes clear that students are passionate about and dedicated to the work they do there. For many, these organizations are an integral part of their DePauw experience.

According to Hendricks, the reason students are drawn to WGRE and why the station holds such significance on DePauw’s campus is because “it highlights the student voice and student tastes.”

Hendricks continues by explaining that with having a WGRE show, students have a lot of autonomy. This is something that both Lang and Waples expressed that they liked about the station. They describe that, because WGRE allows students a great deal of freedom, it has become very accessible. For them, signing up for a show was as simple as writing an email on a sign up sheet.

For Herron, simply being able to work in broadcasting at all is why WGRE is an important experience to have. From this, he said, he was able to learn and develop a variety of skills such as properly conducting an interview and getting comfortable with using the soundboard.

Schoen adds “what’s unique about WGRE is that it’s able to dip its toe into every other organization on campus.”

She continues by saying that WGRE is able to participate in various different events and activities, allowing the organization to form a relationship with many others.

This is especially true when talking about the network that exists between WGRE and the rest of the student media organizations. Having the ability to branch out and get involved in these other organizations because of their involvement in WGRE is why many of the staff think student media at DePauw is so valuable. “There’s a lot of WGRE/D3TV crossovers… I know a lot of people on The DePauw staff that had radio shows or were on The Midwestern review” said Hendricks.

Herron, like many others involved in WGRE, was not only an opportunity to branch out, but an learning experience that helped him with his radio work. “You just learn so many valuable lessons. It’s so valuable that they’re so close… It really keeps us well rounded and improving.”