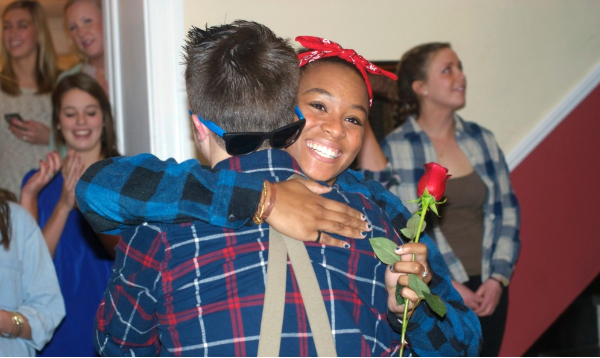 Flower-ins have been a standing tradition for DePauw University’s greek Community since the early 1970s, but due to Title IX, a law that prohibits any forced sexual behavior, the tradition is coming under scrutiny.

Flower-ins occur each spring semester after formal recruitment. The tradition goes that each fraternity is invited to meet the new members of each sorority. When flower-ins take place, the men of that fraternity serenade the women of a house with a song or two. Next, a boy and a girl from each pledge class are announced to both chapters. The boy greats the girl by kneeling on one knee and then offering her a flower. The pair is then given the option to greet by embracing one another with a handshake, hug or kiss.

“Even though we aren’t telling our members to make out with fraternity members, there is a pressure that is inherent in the structure of a flower-in,” said Rachel Massoud, president of Alpha Chi Omega sorority.

Because some students do feel pressured to “make-out” during a flower in, the possibility of complaints to the university and a larger investigation, based on Title IX, could arise from the flower-in tradition.

Panhellenic Council and the Interfraternity Council have begun talking about changing the flower-ins completely, and  Myrna Hernandez, assistant dean of students for Campus Living and Community Development, is creating a task force of students from different organizations to come up with an alternative for flower-ins.

There are a lot of different perspectives regarding how to change the tradition.

“We should change the process and focus on the intermingling of classes of our different chapters,” Massoud said.

Junior Kate Lesswing, another member of Alpha Chi Omega, wants the tradition to be kept.

“I felt like they helped me grow stronger with both my pledge class and the girls in my house,” Lesswing said.

“Improving culture on our campus doesn’t mean banning things that are minutely broken; it means fixing these issues until everyone is satisfied,” Douglas said. “If it gets to the point where it seems as if this system cannot be fixed, then yes I agree they should be banned.”

Some chapters on campus have already moved away from flower-ins. For many years,  Sigma Nu fraternity has held their own event with the sororities called, Milk and Cookies, where the men bring milk and cookies to sorority houses.

“We really look to have conversations with the sorority members and promote a ‘get to know you’ basis in hopes to build certain relations with them for future events,” said senior Cody Watson, president of DePauw’s chapter of Sigma Nu.

Kappa Kappa Gamma sorority has also changed their procedure for flower-ins due to requirements from their national headquarters; however it is unclear if the other sororities on campus will have to follow suit. Right now, the councils have only started thinking about problems involved with flower-ins and have begun to open up discussion for change.