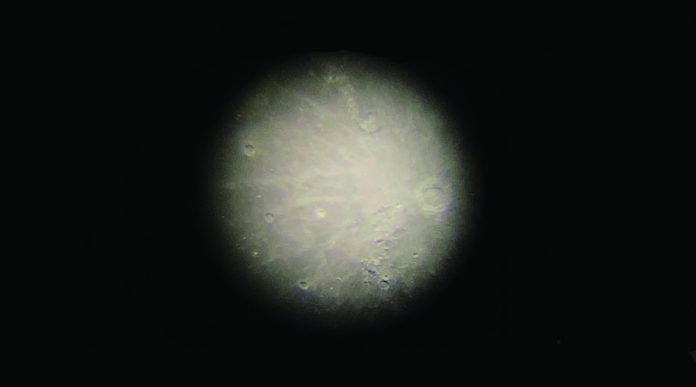 Mid-Autumn Festival, also known as Moon Festival or Mooncake Festival, is a traditional Chinese festival that is honored by many East and Southeast Asian countries and other areas. The festival takes place on the 15th day of the 8th month of the lunar calendar, which was Sept. 21 in the Gregorian calendar this year. It is believed that on this day, in the middle of Autumn harvest season, the moon is at its brightest at full size.

On Friday, Sept. 17, the Mid-Autumn Festival was held at McKim Observatory for students taking Chinese classes and their friends. The festival provided the participants with warm green tea and Mooncakes of different fillings, such as green tea, pineapple, apple, nuts, lotus, and red bean paste. The attendants then were introduced with the story of Chang’e, the moon goddess in Chinese mythology, accompanied by many Chinese classes taking students’ performances, including reading, poetry, and singing traditional Chinese songs.

Yu-Hsin Lin, one of DePauw’s Chinese professors, talked about organizing the events and the decision to host it early. She explained that it was originally planned to celebrate the Moon Festival on Tuesday, but reconsidered because students have busy schedules for the following day. “So we figured out that if we make it Friday, it’d be more fun together and the next day we can take a break,” she said.

Mary Lomanhan, a first-year student from Chicago, said that although she knows there are celebrations happening in Chinatown or in her friends’ homes, that was her first time attending the Mid-Autumn Festival in America. She said she really enjoyed the performances and mooncakes.

Kay Sikana, a first-year international student from Zambia, also found the festival exciting and enjoyed trying mooncake for the first time. “Even though we don’t know much Mandarin, they make us feel very welcome,” Sikana said.

Enoch Chen, a sophomore international student in the School of Music, celebrated the Moon Festival for the first time outside his home country. “It was intriguing because I can still feel the atmosphere of the Mid-Autumn Festival because people from the same culture gathered together,” he said.

The Mooncake Festival holds many meanings for students and professors in terms of cultural values and educational ones. “I remember celebrating it with my family in China a long time ago,” Eihi Yoshinaga, a first-year student, said, expressing the importance of the Mid-Autumn Festival to her culture. Although she usually celebrates it on the exact day of the event, she thoroughly enjoyed celebrating with friends this time around.

Chen shared that this event reminds international students in many Asian countries a lot of their histories and stories. “It’s an opportunity for me to spend more time with my family and the people that I love,” he said.

During the Moon Festival, there are usually different kinds of decorations, food, and performances such as lantern lighting, mooncakes, and traditional dragon dancing. However, in America, there is a shortage of materials and ingredients. “Usually, it’s very hard to find mooncakes in America, but I am very glad that we had it,” Lin said. Nevertheless, the Mooncake Festival at DePauw gave people new experiences through the opportunity to watch the moon with the telescope.

Overall, according to Lin, the Moon Festival was an unforgettable experience for all the attendants. Although the festival was exclusive for students taking Chinese classes and their friends this time, many students expressed their desire for it to be an open event in the near future. “I would like to see more people perform and I would like to invite more people to come and see the performances,” Lomanhan said.

Chen said that many of his Chinese friends wanted to come, but they didn’t know about the event. “We should promote for more people to know and not limit ourselves to people of our own culture so everyone can get to know more about our culture and why we celebrate the Mid-Autumn Festival,” Chen said.