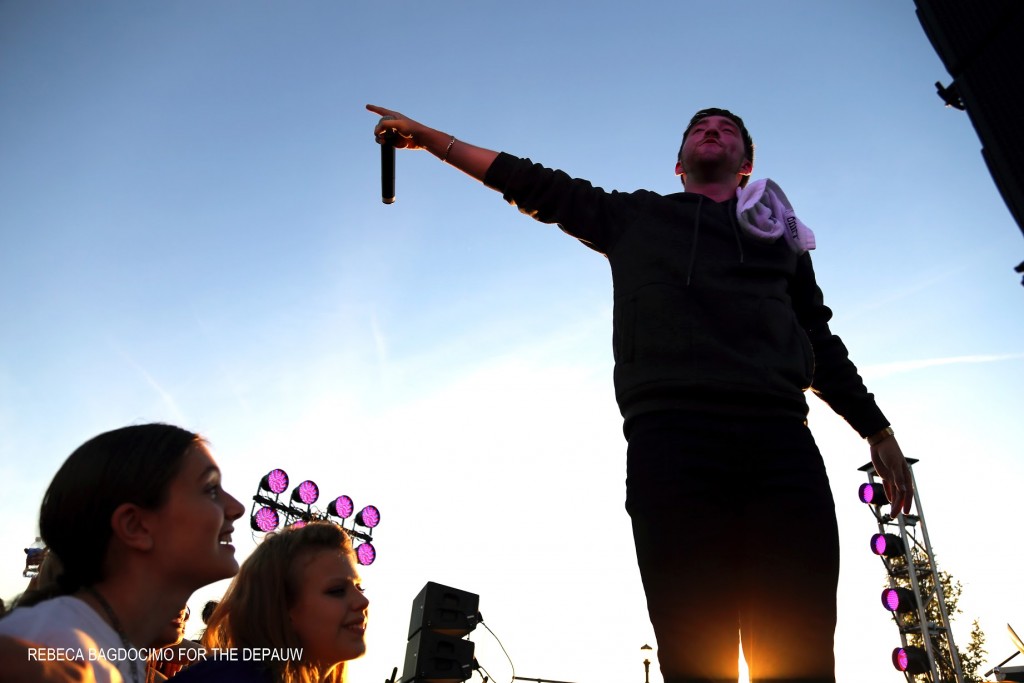 There was no better way to celebrate DePauw football’s 5-0 record Saturday than with a live concert from DePauw senior Mitch Brown, a.k.a., Kid Quill. With a jersey on and a mic in hand, Brown had a ball performing for several familiar faces, a large contrast to his typical shows with various unfamiliar fans.

Despite all of the nervous anticipation he had prior to the show, Brown was satisfied with the performance. All came together as rehearsed.

However, Brown did note the difference between performing for an audience full of random fans and one full of fellow students.

“Performing for my peers was weird,” said Brown. “There’s a different kind of vibe to it.”

Different, indeed. Brown’s farthest show was in Orlando, which was at the beginning of October this year. Brown jokingly described it as a “good mini vacay from Greencastle.” One can imagine the difference between performing in the plaza of the Athletics Campus and a legitimate venue in a different state across the country.

Although the atmosphere was very dissimilar to Brown’s recent musical endeavors, he still enjoyed himself while performing for his peers.

“I had fun, and I know others did, too,” he said. “That’s all that matters. It meant a lot that people came.”

From his witty solos to his melodies with DePauwCappella, Brown charmed the crowd and exceeded expectations, particularly those of sophomore Emily Koch.

“The concert atmosphere was surprisingly similar to a regular concert I would attend,” said Koch. “There were pushy people determined to get close to the front, people there to just chill with some decent music and the rowdy drunk crowd in the middle.”

But what fans really enjoyed was Brown’s “Wabash sucks” chant and a little finger to his dad, a Wabash alumnus and Brown’s manager.

“Even though he went to Wabash, he’s the man,” said Brown. “I talk to him about literally anything and everything. All of the hours spent in traveling gives us a lot of bonding time.”

Brown had to sacrifice a significant amount for those hours spent on the road and shows across the country. He ended his career on DePauw's soccer team during the spring season of his sophomore year to facilitate his pursuit of music. He is a communications major with a minor in political science, yet his ultimate career goals are centered on the music industry.

“I want to try and take on music full-time upon graduation," Brown said. "I’d regret it 30 years from now if I didn’t. However, the degree will help open a lot of doors for me in the industry if being a solo artist doesn’t work out.”

Brown compared his ability to time-manage as a musician with that of an athlete. He admitted that balancing his career with his schoolwork can be challenging, especially as a DePauw student.

Nonetheless, Brown knows that the struggle is worthwhile, especially when he gets to retell crazy fan encounters. From tattoos of his lyrics to being followed for several hours, Brown has experienced it all.

“We had a group of girls follow us for an hour and a half to our hotel,” said Brown. “They kept trying to figure out our hotel room number, and it was terrifying. But we eventually stepped out to talk to them and everything was cool. Just really scary at first.”

Brown quickly learned that those experiences come with the job, despite pursuing music on the professional level for only a year and a half.

Thankfully, all was well and safe when Brown performed at DePauw. The show perfectly concluded an athletically-successful day on DePauw’s campus and ignited a night of celebration of DePauw pride.