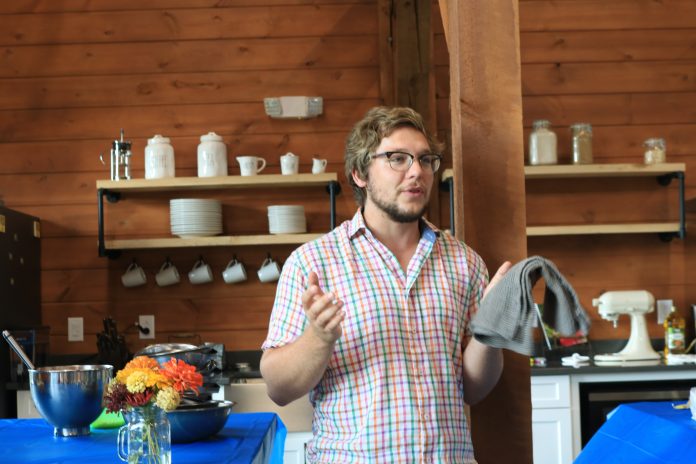 The Fresh Food Club took advantage of the charming new kitchen space at the Campus Farm last weekend, kicking off their meeting with a vegetable pizza-cooking party.

The club, which began at the end of last year, began with the idea of connecting students back with their food as a means to build community. Senior Seth Brawner started the group after working on the campus farm two summers ago.

“There are so many people on campus and people our age in general that just don’t know how to cook,” Brawner said. “I feel like that’s why our society is so unhealthy and removed from our food.”

Cooking began with the crust: a simple recipe of flour, water, oil, yeast, and salt. While that got left to rise, attention shifted to the tomato sauce: tomatoes, garlic, oil, and spices—that easy.

While most of the 10-12 members present were there for their first time, Patricia Schuelke ‘20 had come back for a second meeting after attending a Hoover kitchen tour last spring.

“I really like the club...I think it’s good to encourage students to cook for themselves because it’s really easy to coast with Hoover being so good. And then you get out of here and don’t know how to make food,” Schuelke said.

After 20 minutes of rest, the dough was ready. The novice chefs topped their pizzas with everything from fresh spinach to mushrooms, and popped them in the oven. While waiting for the pizzas to cook, the club took advantage of the Campus Farm’s board game collection before chowing down on their hard-earned meal.

“My pizza was everything I could’ve hoped for and more. It was such a fun process, and also incredibly easy. I didn’t realize that making a pizza could take under an hour, but here we are,” Natalie Brunini ‘20 said.

Seth plans on having group cooks around once a month, but hopes to have plenty of other chances for students to get involved with the Fresh Food Club. Some future events include tours of Bon Appetit’s farms and kitchens and opportunities to help work on the campus farm.

Brawner emphasized, “The whole point of the farm is to cook with the food.”