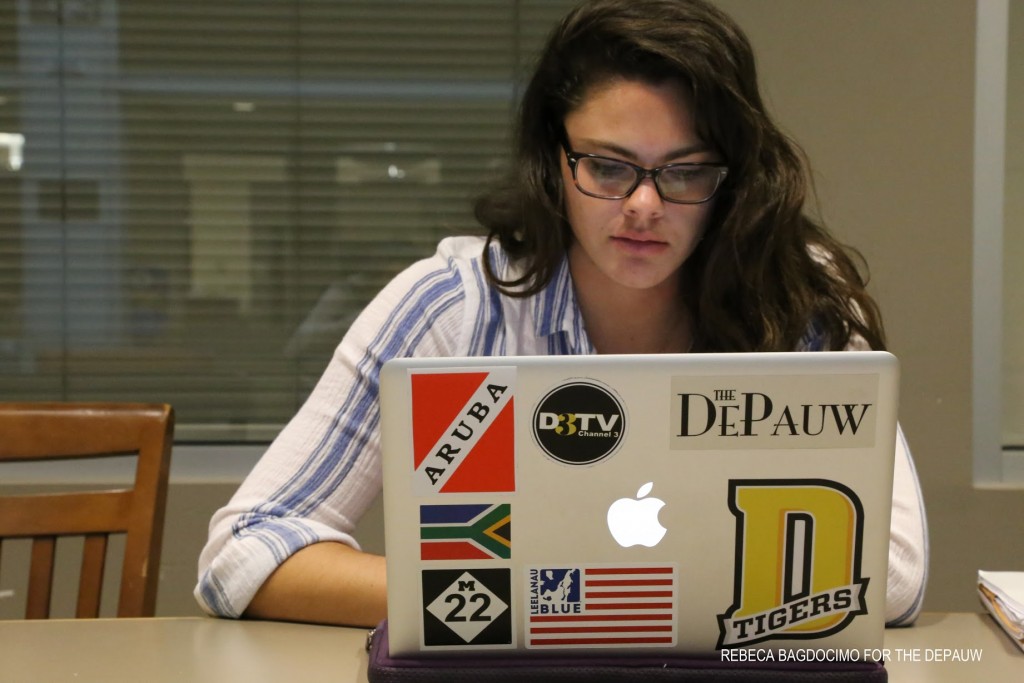 Students eagerly check their midterm grades on Monday afternoon after receiving
an email announcing they had been posted.

With the promise of Fall Break around the corner, DePauw students have been preparing themselves for midterm exams. Given the academic rigor of the institution and the unspoken expectation to be involved on campus, many students perceive midterms as an intensely stressful time. How students cope with this stress can play a major role in their performance and overall well-being.

“I do find midterms stressful,” said senior Michael Chavez, “because that’s when you have a lump of exams, papers, presentations, projects all due at the same time, whether it’s within a week or two weeks.”

“I have four classes and every single one of them had a midterm,” she said. “It was very stressful because I had to study for all of them all at once.”

Students find themselves stressed about midterms for a variety of reasons; they may not have been able to gauge their performance prior to the test, they may not be prepared, they may be intimidated by how significant the grade is and they may alter their routines in ways that negatively affect their health.

Students often feel as if they have to tackle large projects in short amounts of time, and sleep can easily become a lower priority. Mpistolarides certainly felt this way. Her strategy was to stay in Julian or Roy for long periods of time until she completed her work.

“I put my grades before my health,” she said. “I pulled two all-nighters back to back, and my diet was literally just coffee. And I’m learning in psychology right now that if you don’t sleep for 48 hours, you start hallucinating.”

“I think a lot of people forget about eating properly, sleeping properly, even fitting a cat nap in there,” she said.

Julie d’Argent, director and coordinator of training in the Wellness Center, deeply understands how and why stress can affect the student body.

She explained that stress results from “encountering an event and/or threat that we feel we do not have the resources to deal with.” The perception of the event, as opposed to the event itself, is often the most severe stressor for students, she added.

Chavez, an Academic Excellence Tutor, is aware of this as well.

“I don’t think it’s as bad as it seems,” he said. “I think it’s the pressure of the stigma of what midterms is. I wonder if they called it something else if that would make a difference.”

“It’s a test,” he said, “and you’re getting one grade in one class for this infinitesimally small thing relative to the grand scheme of your life.”

d’Argent went on to say that stress is a natural part of life, as it is based in our biological processes. But stress can turn into “distress”  when one does not appropriately with it. d’Argent defines distress as “a negative reaction to stress.”

DePauw University Counseling Services can be a resource for students, especially during difficult academic periods. They use outreach and programming as tools “for prevention, wellness and promotion of a supportive campus climate for all members of the DePauw community,” according to their Outreach and Programming Guide.

“We have students who use our services as a proactive way to avoid getting to the point of distress,” said d’Argent, “and then we sometimes have others who wait until the week of midterms and/or final to come in. The latter are usually seen on an emergency/consultation basis and this is unfortunate as often times the situation could have been prevented in the first place if they had come in earlier during the semester.”

Outside of DePauw’s counseling, students can take advantage of the campus resources like the Academic Resource Center and the Academic Excellence tutors. Beyond the framework of academia, students can also focus on themselves to de-stress.

“I have to go to the gym,” said Chavez. “I have to exercise, even if it’s just for 30 minutes. That’s just my way of de-stressing.”

Chavez also recommends studying with people who can motivate and challenge you, while also holding you accountable. Dela Cruz urges students to practice self love by taking time to take care of themselves.

“If I get an F on a test tomorrow,” he said, “it’s not like that’s going to ultimately affect my happiness in life. While grades are an important measure of your academic performance, you shouldn’t base your worth on that.”